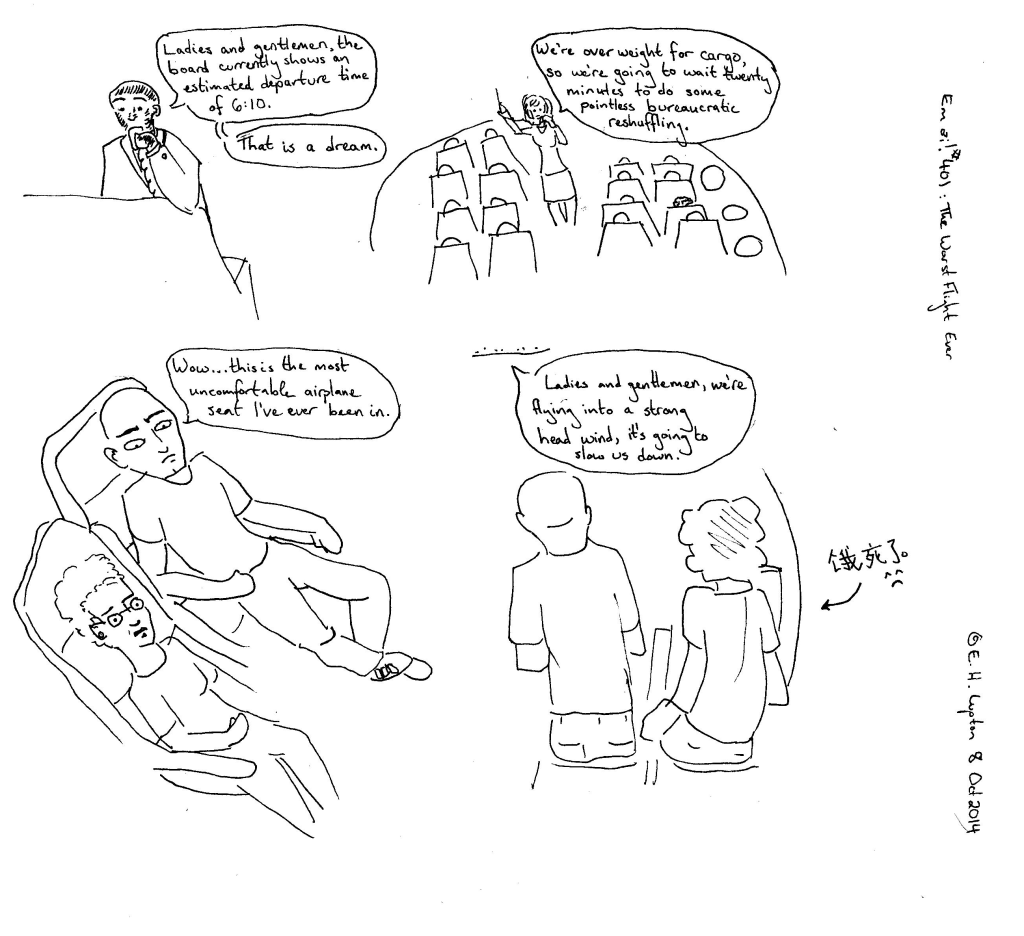 This is a record of our flight from ORD to SLC. O’Hare, or O’Hara as the locals call it, is a giant zoo of an airport at the best of times, but the day we were there it was even more kerfuckened than usual because of lingering issues from a guy’s attempted suicide in the traffic control area. Basically, all flights into and out of the Midwest were last week being directed by air traffic control in Iowa, Wisconsin, Michigan, and I think Indiana. Something like that. Maybe they still are. When we flew home last Saturday, our flight was delayed in part I think because of the same air traffic control problem, and the flight didn’t even go through ORD.

This flight in particular was especially bad because first I was starving and then I started getting a migraine. I think I mentioned this in passing in my race report last Monday, but I didn’t really figure out that I had a migraine until we got to the B&B and I had lain down on the bed for a while. When I got up, my vision was all blurry, a classic migraine prodrome symptom. (Why was I getting it after I’d already had a headache and nausea for a good long time? I don’t know.) If it has never happened to you, count yourself lucky. I will just say it is a very weird sensation. I have bad eyesight (you might notice I draw myself with glasses), but it doesn’t exactly feel like eyestrain, and when I put my glasses on, it was still there. It’s pretty freaky. Not quite as weird as a scotoma (or scintillating scotoma, which has happened to people in my family before but I don’t think has ever happened to me).[1]

So this flight though. Not only was it two hours delayed, not only was there some pointless bureaucratic reshuffling of luggage (luggage in the cabin counts as passenger weight apparently, so they don’t have to add more gas or whatever), but it was the single most uncomfortable plane either of us had ever been on (I think it was a Canadair regional jet, flown by some company d/b/a United). And then I became intensely nauseated. In this photo B took, you can see me in my stupor. And maybe you can see how uncomfortable the seats look.

Also I think I should add that Daniel and Claire are actually quite attractive, contrary to how I’ve drawn them here. They deserve better than my artistic skills, frankly. Sorry guys.

Anyway, I think I have written a lot about running races, but very little about recovering from them. That’s mostly because recovery is the boring part, but perhaps you have never run thirty miles and would like to know what it is like. Here is a brief overview of my week.

Tomorrow I’m hoping to do about 10 on the trails, and then possibly hit a local 15K on Sunday, schedule permitting. My hope is that my foot will hold up and I’ll be discharged from PT on Monday, and then this whole incident will just be “Remember that weird time Em accidentally got PF but ran a 50K anyway?”

So this comic–I’ll point out that in the fifth panel, I’m sitting behind Walter Benjamin, who previously appeared in Em oi! #372, one of my favorites. We’ll file this one under PN6231.A445 L86 2014, for Collections of general literature–Wit and humor–Collections on special topics, A-Z–Air travel.

[1] I don’t really get migraines much anymore, though I did in my early twenties (I think running has somewhat changed my system). Back then, I used to get abdominal migraine, with a main prodrome symptom of sensitivity to touch…which, the best I can explain it is “You are suddenly totally aware of all of the clothing you are wearing and how it is pressing on your body.” Yeah.

[2] Ray has been in a couple of comics, but I can’t find them. Perhaps they are no longer online. But at least one of them is still up on my mom’s fridge.

Finished this quilt top today. It's a little wonky

It's a beautiful day for a new year.