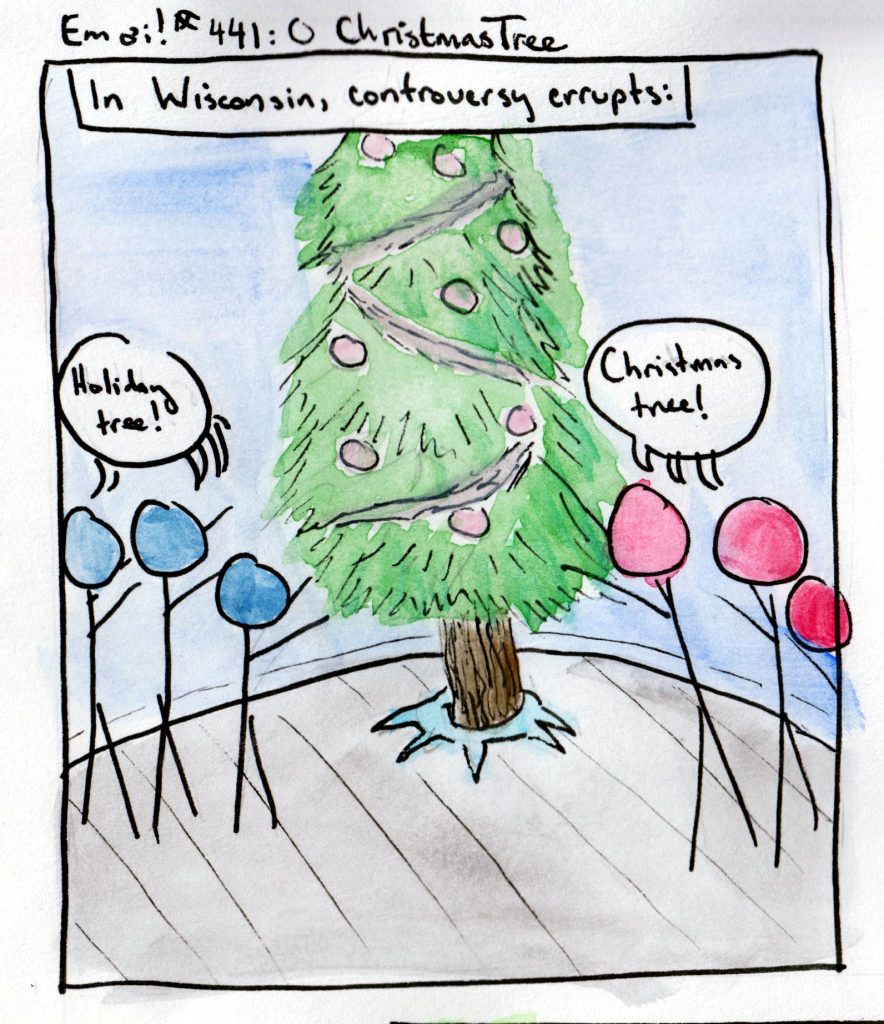 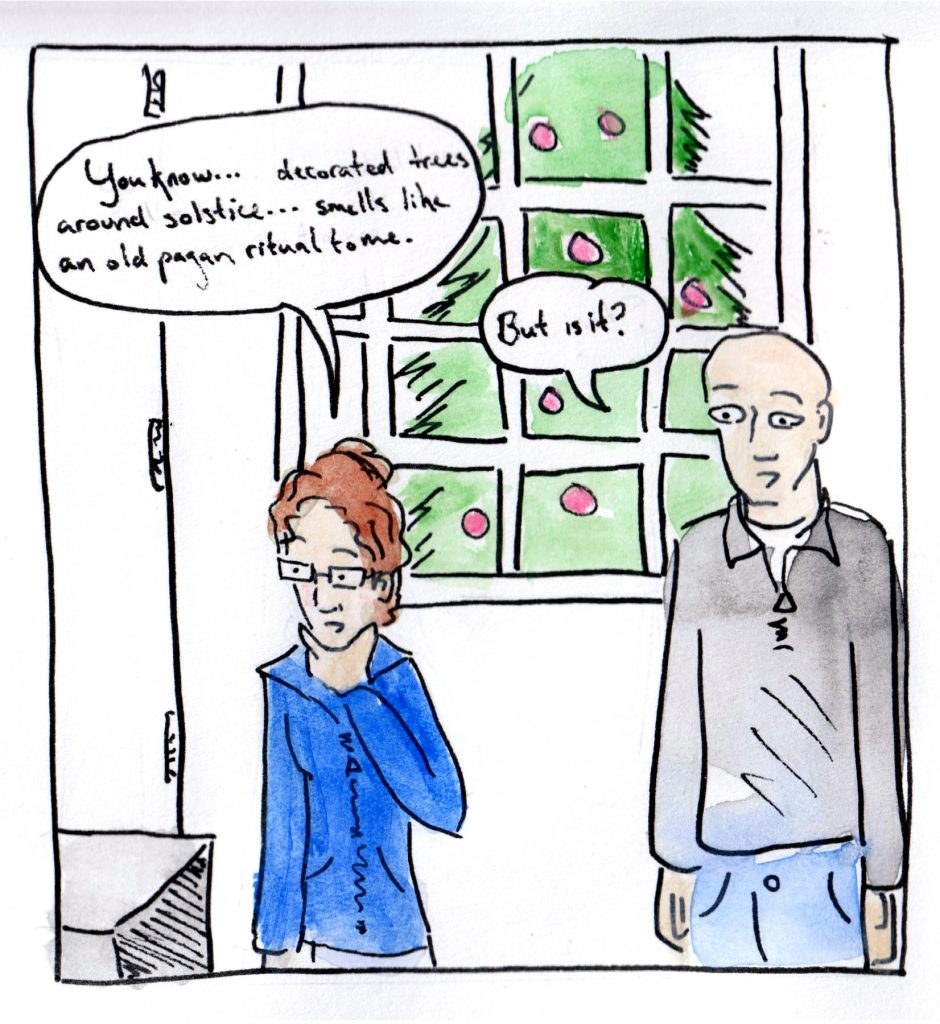 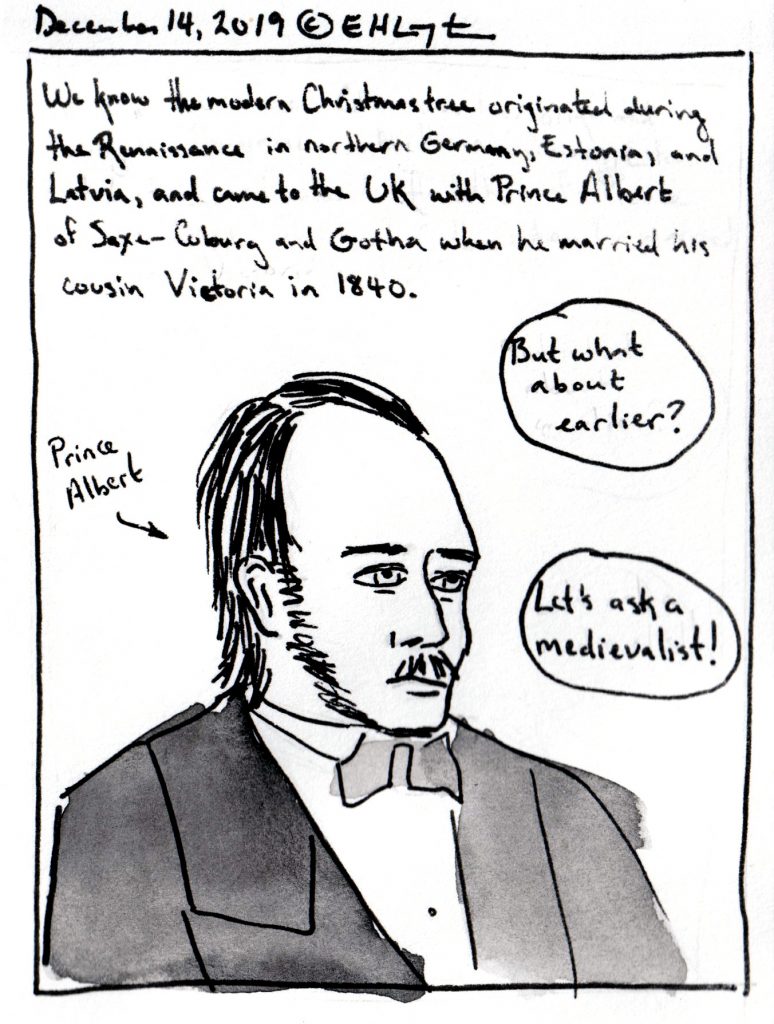 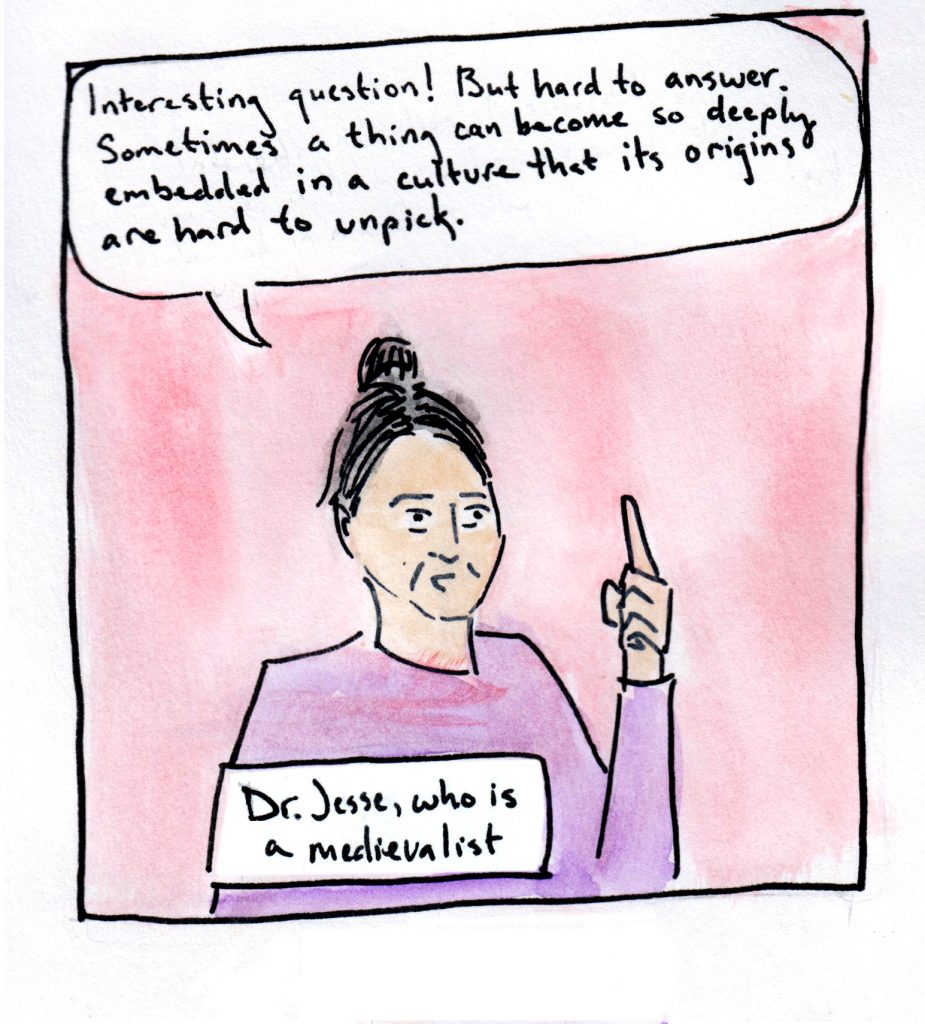 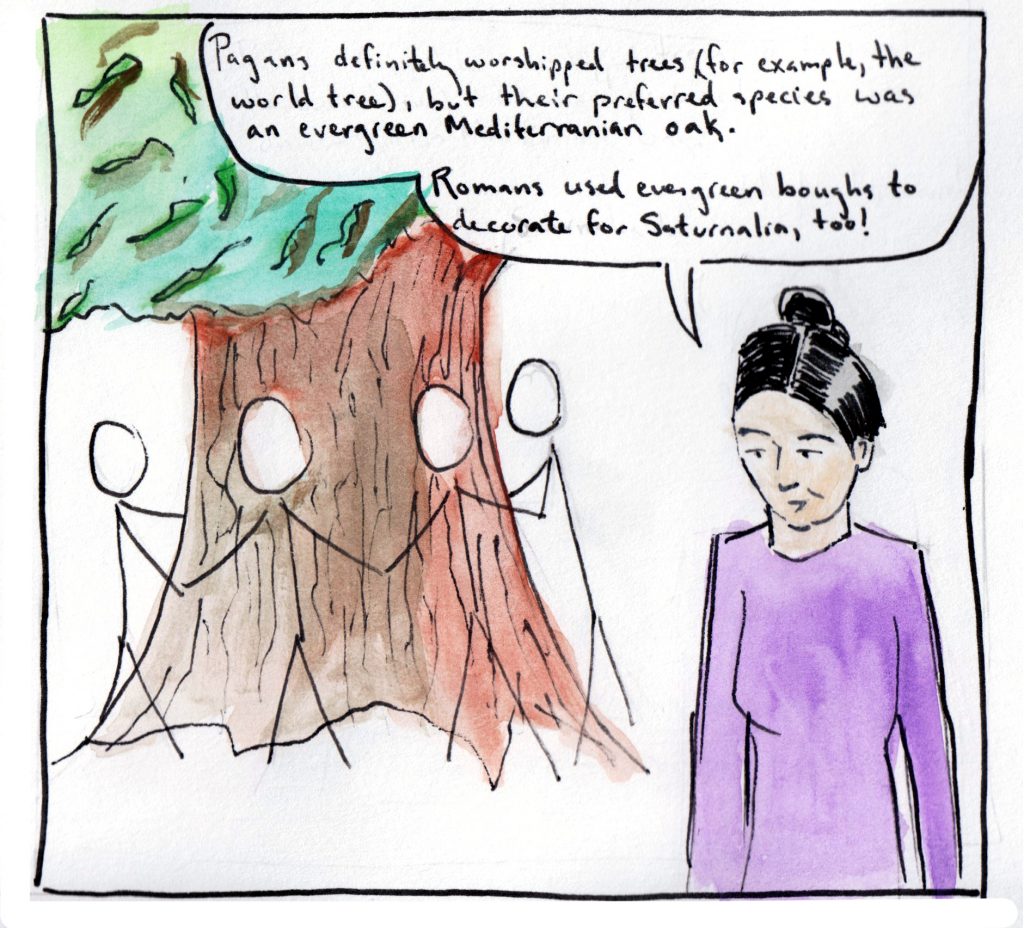 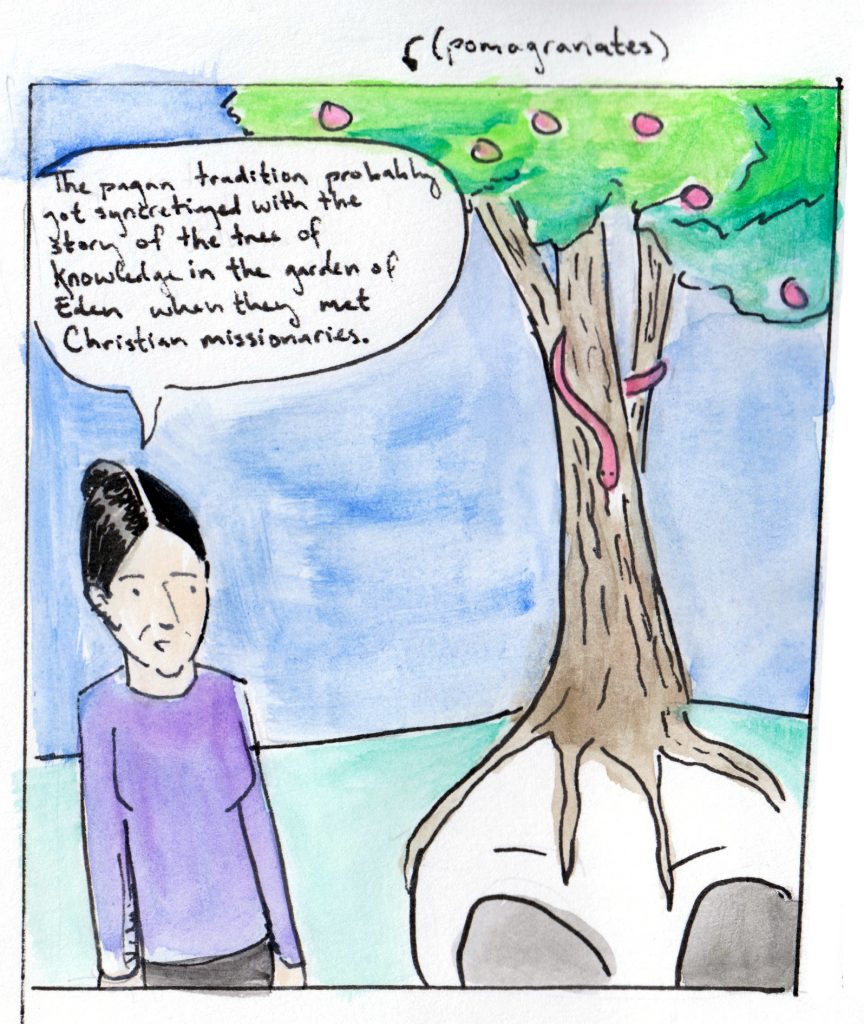 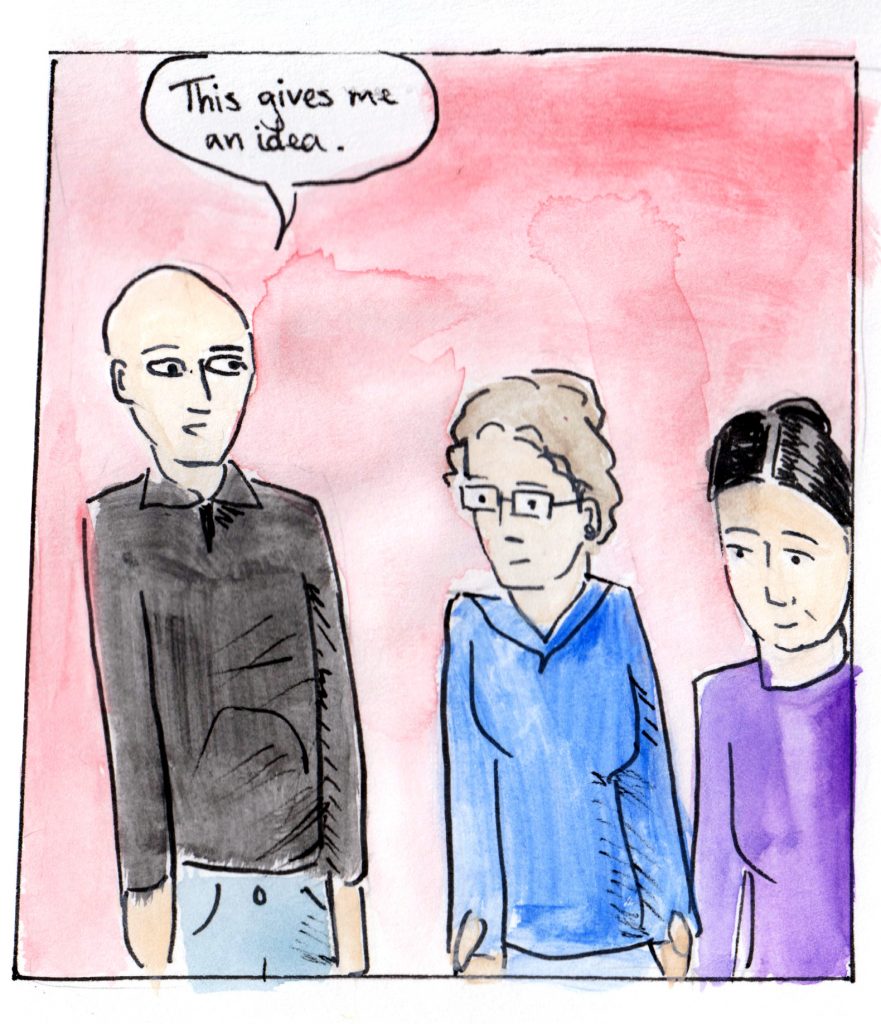 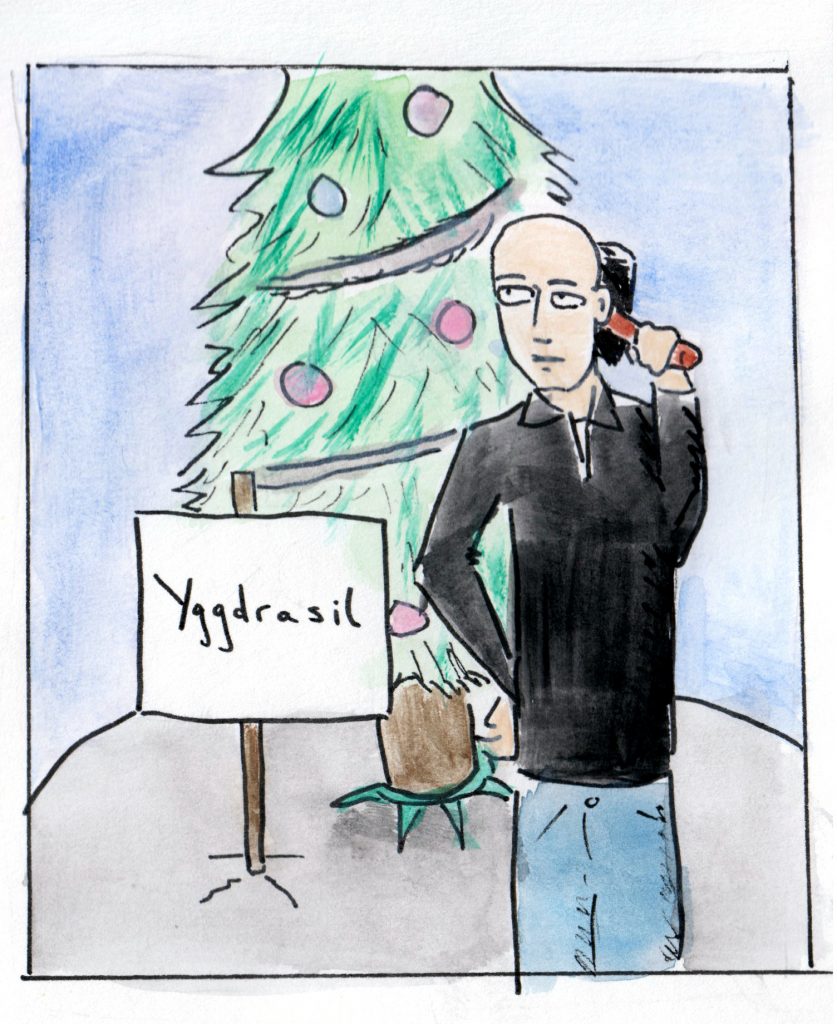 So: true story about the political situation here in Wisconsin. My actual sequence of thoughts about this:

Hey Robin Vos, I have an offer, on behalf of the liberals of Wisconsin: If we let you call it a Christmas tree, could you pass some bills to decarbonize the economy, make electric cars easier to buy, maybe add in some incentives for all the farmers to feed their cows seaweed to reduce methane emissions?

That idiocy aside, I hope you’re all having a good winter holiday season, whichever you choose to celebrate–Yalda, Hanukkah, Christmas, Yule, Saturnalia, Kwanzaa… I’m sure I’m missing a few.

We opted not to do a Christmas card this year; after an autumn beset by illness (mine and that of others, culminating in spending ten hours throwing up last week from a norovirus), I opted to put my limited energy toward other projects (good news is I finished draft #2 of my new novella and it has gone to my beta reader). However I have greatly enjoyed all the cards I’ve received from you all! Hopefully next year we’ll get our acts together in time and I’ll have something to send out.

Side note on the comic: The tree in the sixth panel is growing out of a skull because in some traditions, the wood that the cross was made from came from a tree grown from seeds of the tree of knowledge that were planted on Adam’s grave (reference the Golden Legend if you’re curious about this). There was originally text discussing this, but it was cut for space. This is already a really long and wordy comic. Also, sorry for all the typos etc. I swear I remember how to read and write.

We’ll file this one under GT4989 L86 2019, for Manners and customs (General)–Customs relative to public and social life–Festivals. Holidays–Special days and periods of time–Christmas–Special customs–Christmas trees.

I should clarify straight away that “Lupton Fact” is the term B uses for claims that I (and my brothers) claim that occasionally turn out to not be true, or not be entirely true.

Usually when I do comics about history or philosophy I fact check them pretty closely. This one, I did not–mostly it was a good story that I wanted to transcribe. To be honest, the word “mystery” in the term “Mithraic Mysteries” (or “Mysteries of Mithras”) means that you didn’t get to find out much about the rituals and so on until you had been initiated into the religion–it’s the modern-day equivalent of Free Masonry. Or Scientology. No writings from the Mithras cult survive, as far as I know, and all of what we know about them is based on supposition drawn from artworks, artifacts found in caves (where they held their rites), and a few contemporaneous writings, including one early church father. In short, we don’t really know what they believed or who they stole from. They were contemporaneous in time with Christianity, certainly, but whether they were contemporaneous in geography is a question. It seems that at least some of the similarities between Christianity and the Mysteries of Mithras may have been drummed up by the New Atheist Movement to score points on Christianity.

That said, it’s a good story.

I wanted to make this chat longer, but I’m really tired, so I’m just going to file this under BR128.M5 L86 2013, for Christianity–Relation of Christianity to other religious and philosophical systems–Special, A-Z–Mithraism. And now to bed.

OH, by the way. If you read my book, and you happen to be on Goodreads, it’s on there–you can leave a review! Exciting, eh?

Sean messaged me this morning to provide an alternate account of the connection between Mithraism and Christianity. It goes something like this:

It didn’t initially seem fair to me that I should get laid off the week after Thanksgiving, three weeks before Christmas. Although I neither celebrate nor enjoy the latter holiday, it seemed like the scene out of The Christmas Carol that Dickens couldn’t stand to write. But I guess that the culturally mediated significance the greater United States places on these few weeks are no match for capitalism–and what is Christmas anyway but a holiday whose cultural meaning has long been surpassed in the minds of most Americans by its attached capitalistic values. In other words, as Marx would say, capital really does drive change, and no one, not even a corporation that makes a pretense of having “values” and caring for their employees, is going to let some religious nonsense stop them from doing what’s good for the bottom line, especially as Christmas is religious nonsense pasted on top of previous levels of religious nonsense (or, if you prefer, folkloric nonsense), itself probably resting on previous levels of superstition, all of it drummed up to assuage the old monkey brain fear that the sun is going to go out and the cold winter is going to last forever.

In other words, to quote Ford Prefect, “Time is an illusion. Lunchtime doubly so.”

In other words, bah humbug.

I was carrying out my main Christmas tradition this evening, which is making fudge for my husband’s relatives while sulking, and I decided to listen to This American Life’s episode “Christmas and Commerce” (no. 47). It has the long version of David Sedaris’s “The Santaland Diaries,” which if you’ve never heard it, do yourself a favor and listen. I am going to listen to it every year from now on. Anyway, the third act is David Rakoff talking about playing Freud in the window of Barney’s department store in NYC, and he says, “If psychoanalysis was late 19th century secular Judaism’s way of finding spiritual meaning in a post-religious world…retail is the late 20th century’s way of finding spiritual meaning in a post-religious world.” I think that sort of sums up what I’m thinking about.

The decision that I (and several of my coworkers) was laid off came down nearly three weeks ago, and I suppose I should be done with my sulking and on to the next step of the process, finding a new job. But I’m lingering. I don’t know why, exactly–probably the stress from thesis and other things. And, well, “as happy as a Jew on Christmas” is not an expression for a number of very good reasons–this is a difficult time of year, in short. And I’ve been reading Žižek, that doesn’t help.

Here’s a picture of my cat Kali and Edgar the dog chilling out together. Gaze upon it and repeat to yourselves, as I do: It’s only a job. Life goes on.