If you don’t follow me on Instagram or other social media platforms, you might not be aware of my new hobby of posting mini comics over there. So here’s a roundup, plus a new one I somehow didn’t get scanned/posted before now.

These were all scanned using the CamScanner app, so if they look kind of cruddy, that is why. I ran them through Photoshop (okay, GIMP), but some of them, this was as good as I could get them. Or conversely, if you think they look awesome, that’s also why.

Like a lot of people, I sometimes struggle with feeling like a total fraud. At this point, I’m pretty comfortable with my frauditude. I observed to someone a few years ago that it has been a long time since I went into a job confident that I could do all the parts of it flawlessly without issues. If you are reading this and also struggle with feeling like you are faking your way through life, I urge you to not worry about it. Nearly everyone feels like this. Just roll with it, you’ll be fine.

I went on my first business trip (to Long Island) since 2008 the week of January 11th. That previous trip happened to be in early February of a leap year too (to Houston, TX), and was chronicled in this comic:

It’s weird that eight years later, I’m back in healthcare IT after a long jaunt into different various fields. I no longer worry about feeling like a corporate stooge–for one thing, I work at a much less corporate place, and for another, I have come to the realization that art and making a living both have to have a place in my life. At least until the singularity.

This actually happened on my way back from my trip–there was a fire alarm as I was coming through security. No one seemed concerned. Certainly not the TSA agents.

On the way out, I left the morning that David Bowie’s death hit the media. I actually woke up to an email from B telling me about it. On the way back, I was sitting in LGA waiting for my flight when the news that Alan Rickman had died broke. It was a weird week. At the gate, the agent was making announcements noting that it was not necessary to “slam” one’s bag into the bag sizer, and if we persisted in doing so, someone would get hurt.

Deadlifting with Daniel during the St. Paul trip. I didn’t feel like inking it, and it looked better in pencil anyway.

Mixed grip means one hand palm up and one palm down. It is the best; I don’t care what you say.

I sketched this out basically on the back of an envelope to amuse Daniel and Claire while we were in St. Paul for a wedding after I ran from their house down to the Mississippi River. Then I decided to go back and draw it out for everyone. It got three likes on Facebook. That is probably about what it deserved.

I get anxious about travel.

We went out to a company event in Montana for the weekend. After spending a few hours cross-country skiing (skate skiing, actually), I dashed out of the rental shop just to see the shuttle back to the lodge leaving the parking lot. Luckily, one of the women was heading back to pick up some trekkers, so I managed to get a ride and didn’t have to wait two hours for the next shuttle. We talked about wildlife on the way back. 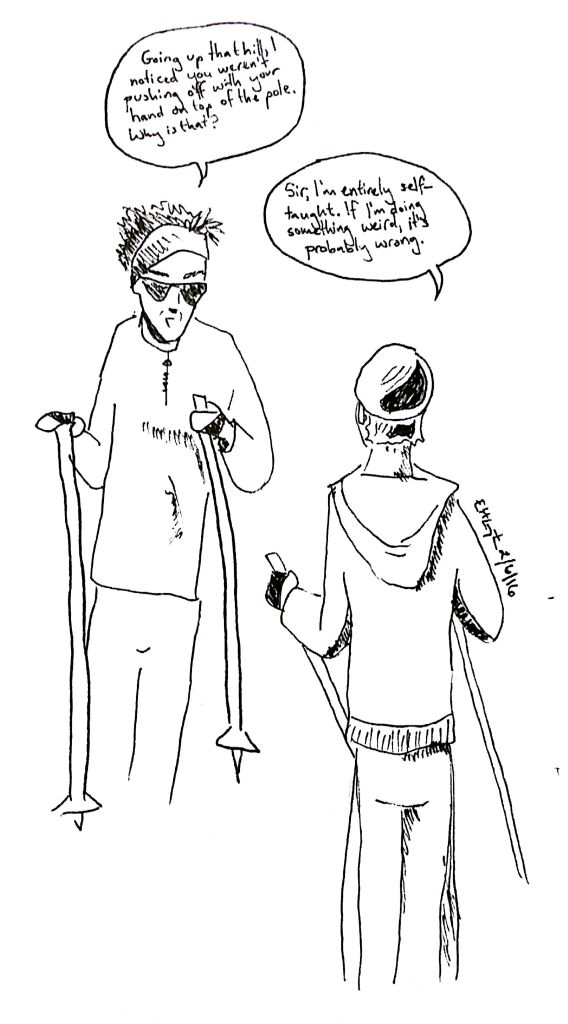 Another one from my skiing experiment, and one from the hotel. A bit behind the times, I guess, but no worse than the Joyce one, right? XKCD did the same thing a while back, except much better.

That’s all for now. I’m done traveling until April, but I may do a few more of these periodically. I enjoy the somewhat instantaneous feedback aspect (i.e., people clicking the little heart icon on Instagram), and it’s usually a lot faster for me to do these little ones than to think up a joke and draw 4+ panels. But we’ll see. I have another longer comic sketched and partially inked that I might be able to get up this week if I’m lucky.

Another work in progress. This is frustrating beca