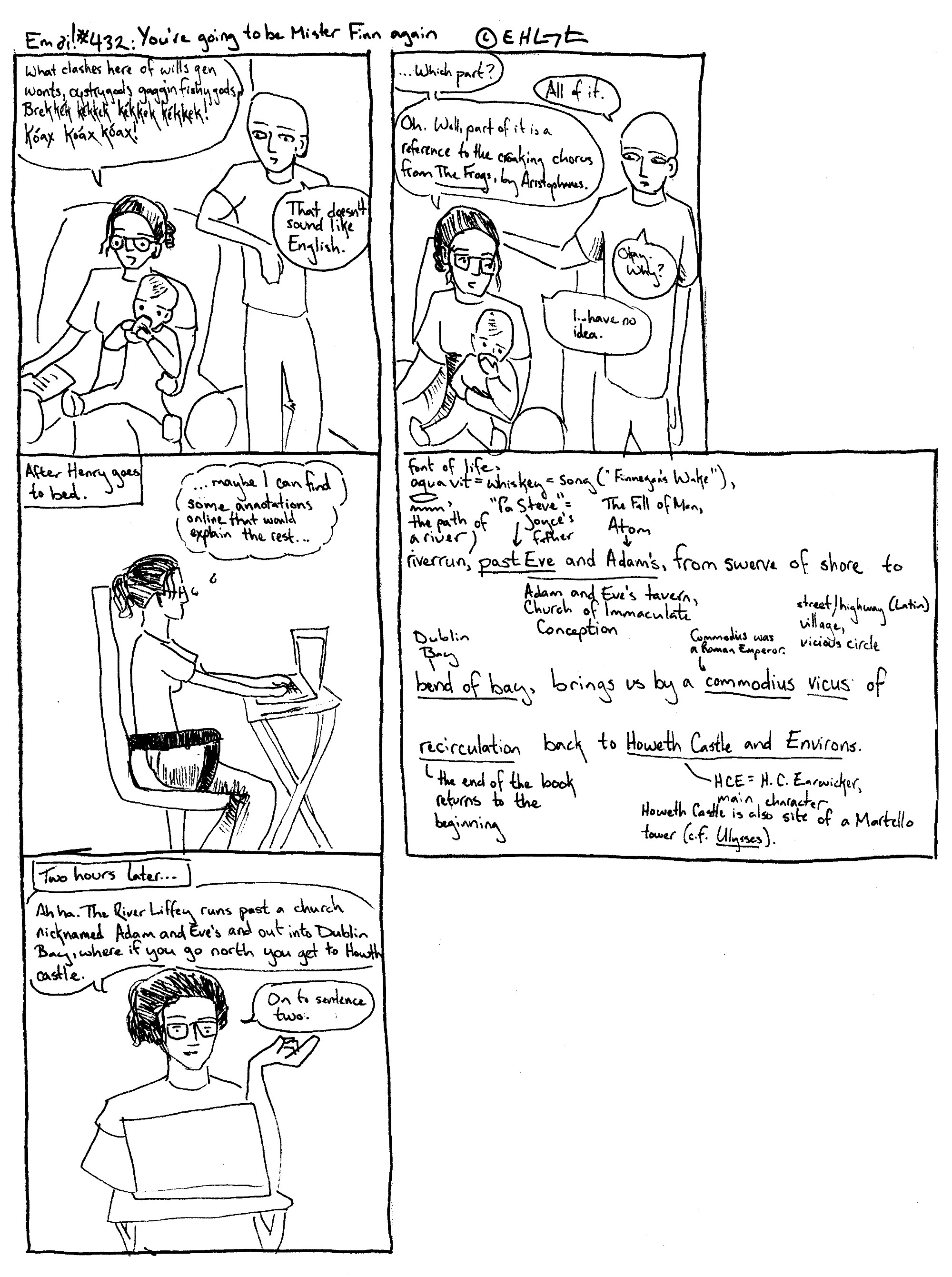 During a rather wide-ranging talk with a friend, it was suggested to me that I should try reading Finnegans Wake aloud to young Hal. Of course I tried it the next night. Much of Ulysses reads aloud very well, and I have gained a new appreciation for the Telemachiad that way. And I have heard it said that reading the Wake aloud is also a great way to catch the double meanings. But. Um.

Honestly, reading FW aloud feels a little like developing some type of aphasia. And the double meanings (I hesitate to call them puns) are, well–

The word I’ve bolded here is extremely typical of the type of reference that’s supposed to become obvious when the text is read aloud. “Passencore” = “pas encore” = French for “not yet.” Sir Tristram had not yet returned from North Armorica. (Armorica is one of those words that makes you feel like you’re having a stroke–it’s really an ancient term for part of northern France, but I think it is used intentionally to also seem to reference North America, since later in the paragraph there are references to the city of Dublin, Georgia, USA.) Anyway. If you read the text aloud with the proper Dublin accent (not a secondhand attempt to mimic some great aunt’s County Down accent), and possibly also you knew what you were looking for, you might make sense of passencore. Or, as mentioned in the comic, “ostrygods gaggin fishygods” = Ostrogoths gagging (fighting with) Visigoths. But you’d probably have to figure that out from context as much as anything else.

I have started slowly picking my way through a few good books on the subject (A Skeleton Key to Finnegans Wake by Campbell because I recall my dad having a copy…and A Reader’s Guide to Finnegans Wake by Tindall, because it was recommended by one of the websites that came up while I was researching this). They are helpful and put things in some context–more so than, for example, this site, which aside from having been designed in approximately 2003 contains more information than can ever possibly be useful. Anyway, the short answer to the question you’re all probably asking (“What on Earth…?”) is that the book depicts a man (probably HCE? although I don’t know if there’s a good reason to assume the character inside the dream is the same as the one outside) who falls asleep and dreams the history of the Earth and its repetitions as described by Giambattista Vico in The New Science.[1] The fall of Tim Finnegan and his revival, as depicted in a Dublin street ballad (“Finnegan’s Wake“[2]), becomes the prototype of every fall (the fall of man, e.g.). HCE becomes the Duke of Wellington, Adam, Osiris… (Yeah, another significant influence was the Egyptian Book of the Dead, which leads to my new PhD thesis, Colonialism, Orientalism, and Intercultural Mimesis in the Works of James Joyce.[3]) Other characters (HCE’s wife and sons) are similarly used symbolically to represent recurring figures throughout history. If you’re confused, you might want to check out The Skin of Our Teeth, by Thornton Wilder, which does basically the same thing except not in dream language.

One other fact I recall: Joyce spent a good portion of his life on this book. So while he was working on it, his daughter Lucia (who was fairly ill-used in many respects) was going mad. Carl Jung, who treated her, apparently observed that while both Joyce and his daughter were “submerged in the same water,” “…where [he] swims, she drowns.” So there’s that.

We’ll file this under PR6019.O9Z5 L86 2018, for English literature–1900-1960–Individual authors–J–Joyce, James, 1882-1941–Biography and criticism–General works. Also please note that this is one place where the classification falls a bit flat–this is the English literature category; there’s also an American literature category, as well as Canadian literature. During Joyce’s lifetime, Ireland went from being a colony of England to an independent country. But there’s no Irish literature category. And yet Joyce is inevitably defined as an Irish writer. (Also/however, c.f. the following quote from Ulysses.)

–I am a servant of two masters, Stephen said, an English and an Italian.

A crazy queen, old and jealous. Kneel down before me.

–And a third, Stephen said, there is who wants me for odd jobs.

–Italian? Haines said again. What do you mean?

Haines detached from his underlip some fibres of tobacco before he spoke.

–I can quite understand that, he said calmly. An Irishman must think like that, I daresay. We feel in England that we have treated you rather unfairly. It seems history is to blame.

[1] I used to reject the idea that history was at all cyclical. Then we elected Nixon II as president. (I am sure this has something to do with Nixon becoming a somewhat funny pop-culture figure rather than an evil motherfucker in the meantime, but–first as tragedy, then as farce, right?)

[2] The Gaelic word they mention, “uisca beatha,” comes from the Latin word “aqua vitae” translated into Gaelic in the Middle Ages.

[3] The extremely genius part of this is that most people haven’t read the Wake and aren’t going to, so you can make almost any claim you want about it and people will believe it. C.F. this blog post.

Found this in a little library today and it's a wh

Babies just get told how adorable they are all the