This is based on actual conversations I had back when I was still going to aikido (something I did up to about 20 weeks). It surprised me when I was talking to guys about pregnancy–and I mean guys who have kids–the two things they know about pregnancy are 1) there is a lot of puking, and 2) get an epidural.[1] Actually, after making this observation, a friend pointed out that most people don’t spend as much time with their spouses/significant others as I do on a day-to-day basis, so the vomiting and labor may be the biggest parts of what most men remember about pregnancy. That and cravings, I guess. But just like I didn’t actually throw up until I got the stomach flu in March, I didn’t really have any exciting cravings beyond granny smith apples with peanut butter.

So when I originally drew this comic, I messed something up–I drew and inked another comic on the other side of the page, and the ink bled through. Fortunately, B was able to save the art with Photoshop. He also produced this version, which I actually think is in many ways much better than the original, betraying a good sense of comic timing as well as an acute awareness of, well, Em (Em qua character and Em qua me):

I’m filing the first comic under HM1161 L86 2017, for Sociology–Social psychology–Interpersonal relations. Social behavior–Interpersonal attraction–Friendship. The second comic will be filed under BJ1491 M48 2017, for Ethics–Special topics–Hedonism and asceticism. Renunciation.

I wanted to add a few notes about running during pregnancy, since I have pretty much finished running[2] (though not working out) at this point, and since I anticipate that in a few weeks, the topic won’t be of too much concern for me anymore but that I may want to retain the information for posterity.

I have run seven races while pregnant[3]:

I think this kind of paints a picture. The weather is always a major factor for any runner, but it’s especially a big deal during pregnancy. For example, the Ice Age Trail race was extremely humid–in another year, I would have finished, although slowly (I was on pace for a three-hour half–significantly slower than I’ve ever done on that course–but of course in another year I would have probably been a little faster too). But this year, I decided that discretion was the better part of valor and ended the race after the first 6.5-mi loop.[4] In fact, “more” is basically the watchword for running during pregnancy–you need more water, more calories for a given distance, more bathrooms,[5] and eventually, more time.

The situation is not quite as 100% clear-cut as I’m making it sound here, though. Here’s a chart of my pace from November until July (click to embiggen): 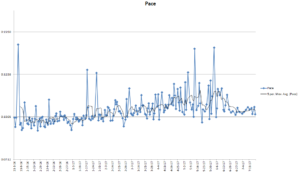 As you can see, I have gotten slower, but things are uneven. On the other hand, this is skewed by the fact that I moved my training inside as of May and took to the elliptical only as of mid-June. The moving average is set to a period of five because typically I run five days per week, although since I switched to elliptical only it has been 4 days / week elliptical, 3 days / week swimming.

So here, briefly, is a list of my advice for running during pregnancy. Standard disclaimers apply–this is basically what worked for me, but it may not work for you, or even be feasible.

The funny thing about this photo is I remember feeling so victorious as I crossed the finish line. But in reality, I look incredibly toasted (and covered with mud). And eight months pregnant. Some things are unavoidable.
—
[1] It is perhaps unsurprising that men who have watched their partners go through labor both with and without an epidural will say, “Get the epidural.”

[3] Technically I was pregnant during the 2016 Burbee Derby, but I didn’t know it yet, so I’m omitting that here.

[4] I’m still kind of disappointed in myself about this. I’d never DNF’d a race before. (For those who aren’t runners, DNF = Did Not Finish.)

[5] One highlight of the IAT race was stepping off the course to pee in the bushes and discovering I’d chosen a thorn bush to crawl into. Good job, me. 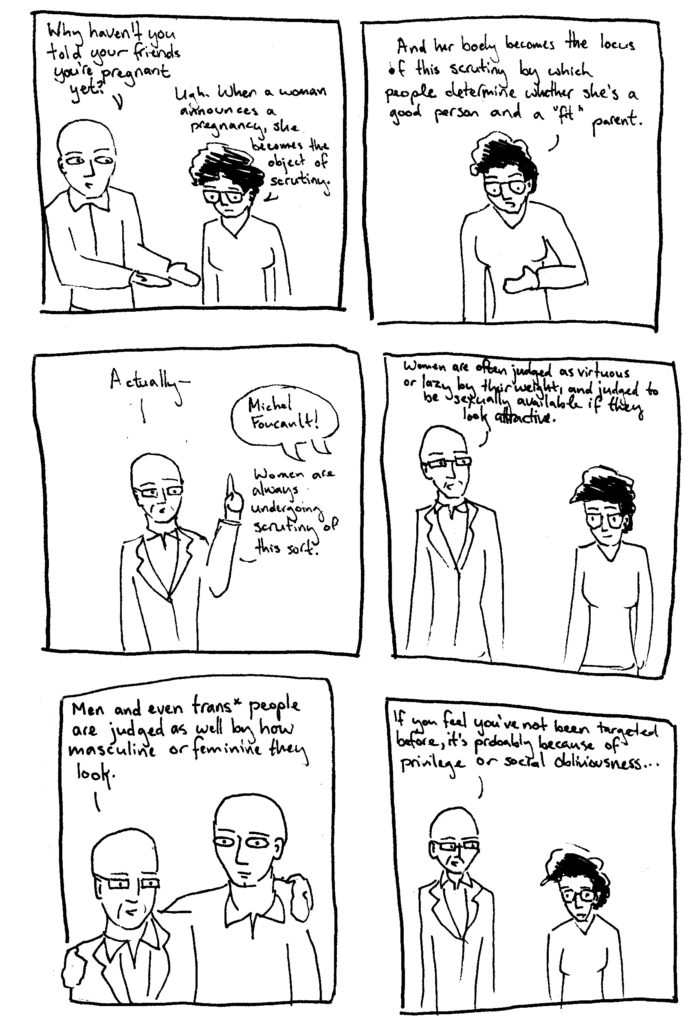 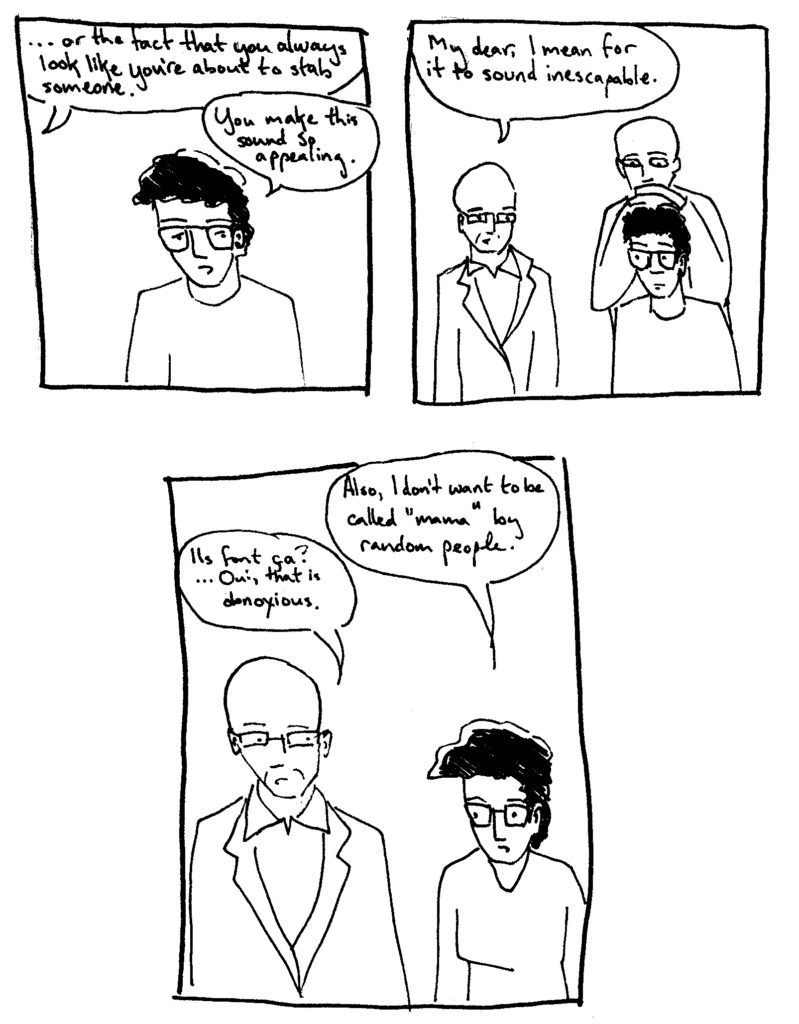 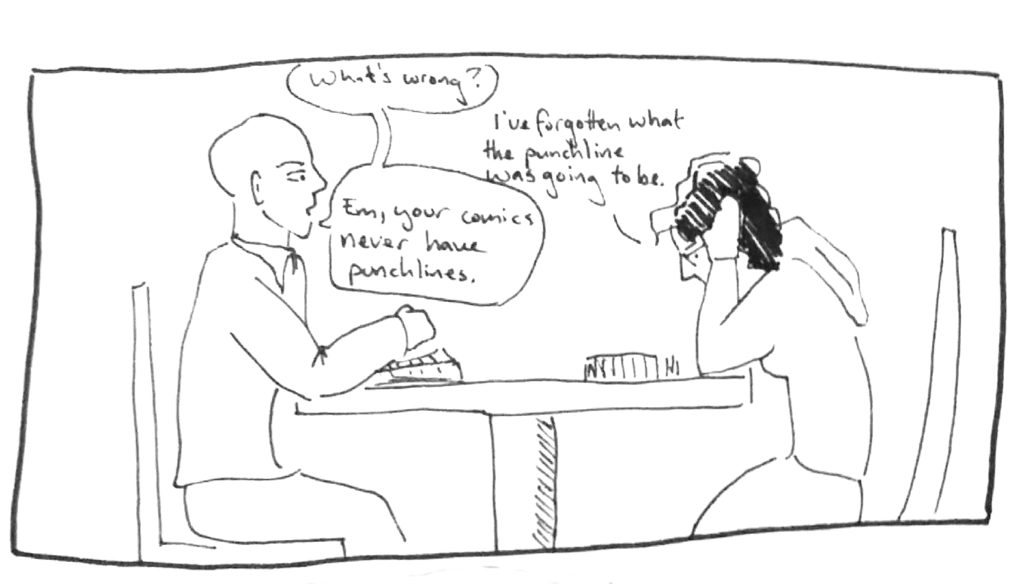