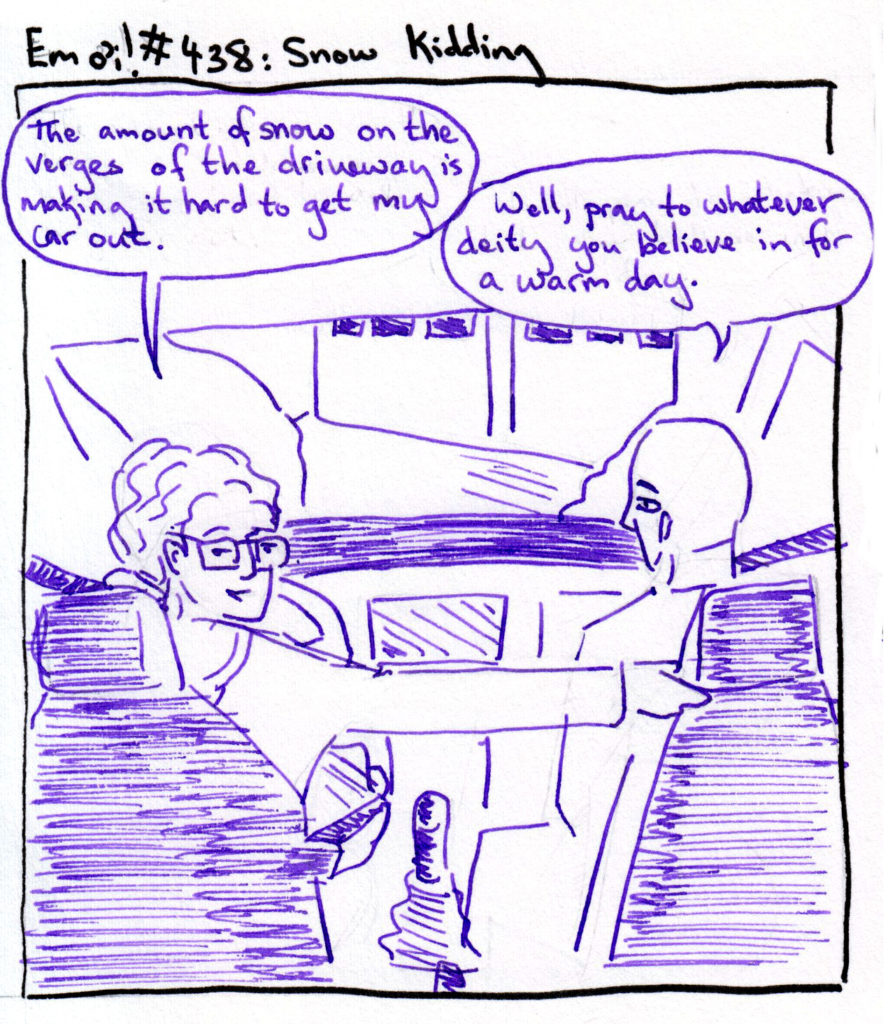 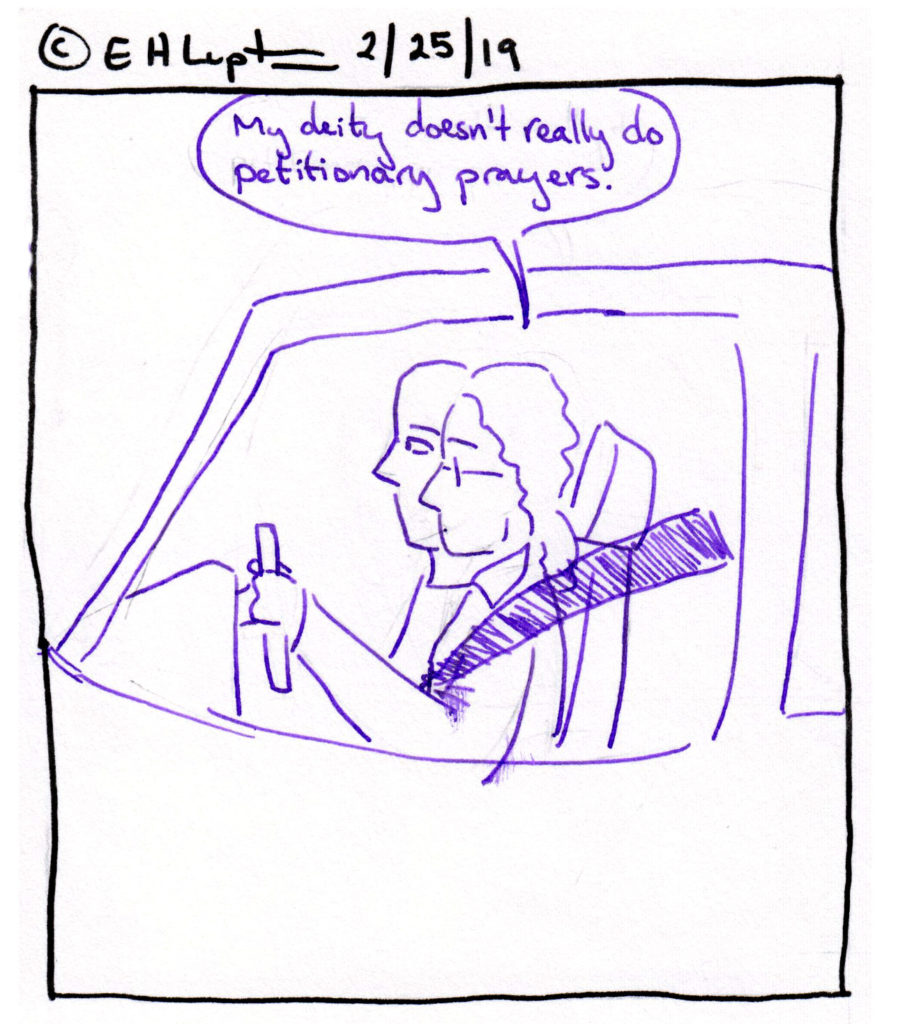 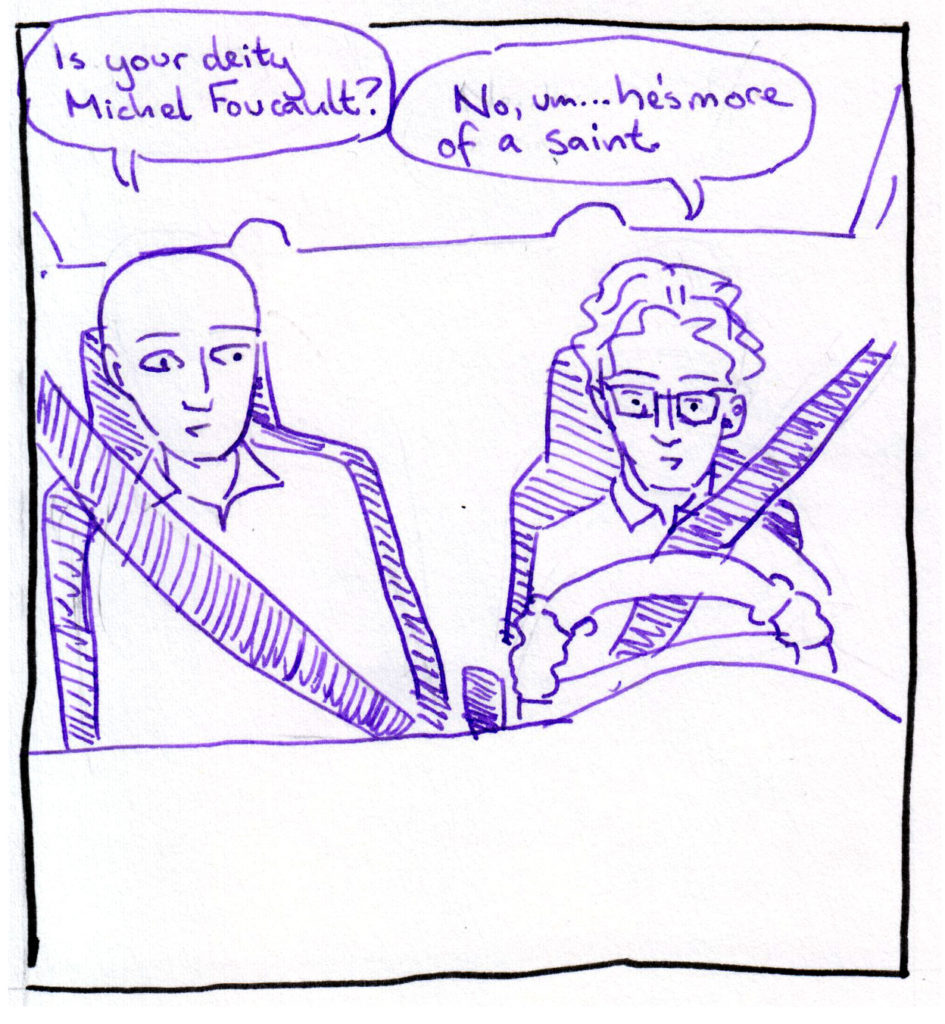 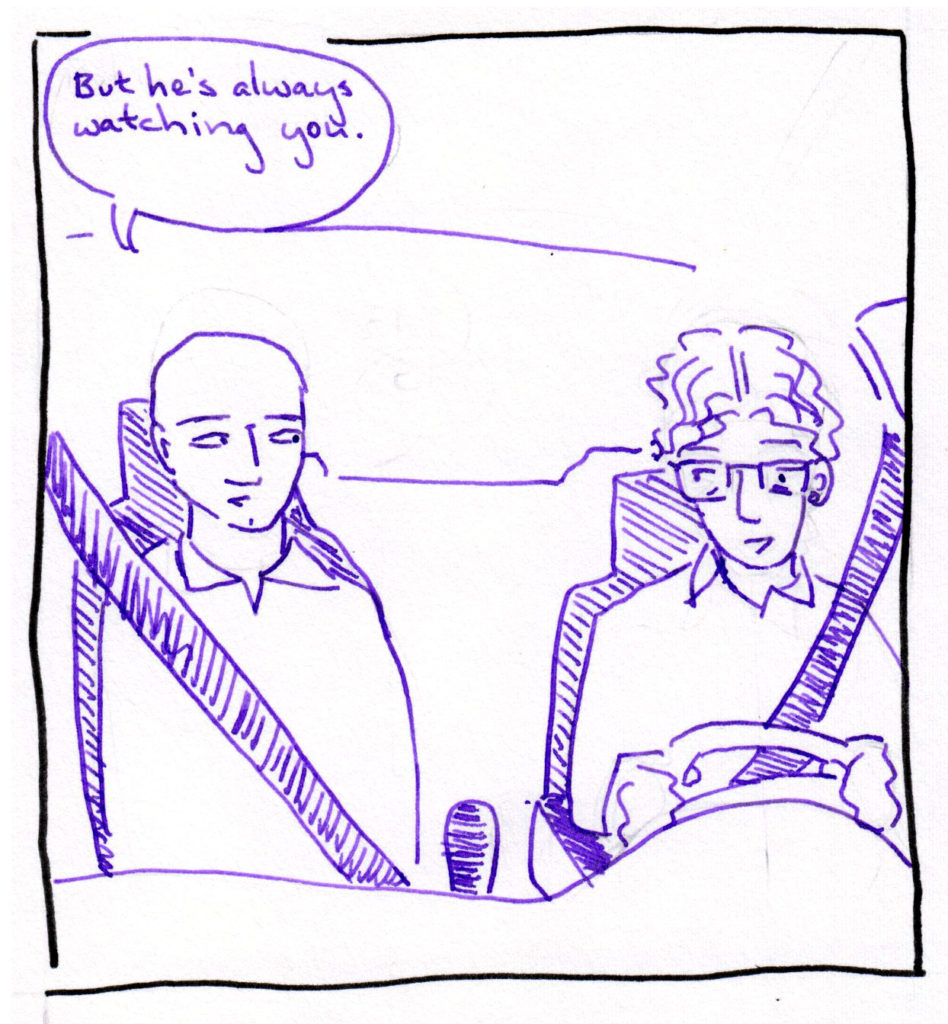 Long time no talk! Astute readers will note that I’ve skipped a number… I actually got involved with another (six-panel comic) that was very funny, but it got a bit overwhelming with the amount of edits it needed and I don’t know. It has been a few years since I had really bad seasonal depression, and–I wouldn’t exactly call this depression, but while I’m normally at the best of times something of a suitcase full of anxiety and neuroses held together by coffee and running, the winter has reduced me to a quivering ball of anxiety with a constant disaster film playing in my head reminding me that all my choices are meaningless because we’re all going to die in twenty years, and ultimately I guess I’m a terrible person for having made said choices (instead of other, different choices? I don’t know).

Talking about it out loud has actually been really helpful in reminding me of the absurdity and irrationality of my thoughts. I guess that’s called reality testing. I’m also trying to sleep more,* taking vitamin D, and sitting in front of my happy light more regularly.

During my off-time, I’ve been doing a figure drawing class, where I’ve learned a lot, like that the way I’ve done shading in this comic is not correct (too many gaps between the strokes). Also, I’ve learned that being in a room with a naked person is awkward. Like–I feel very Midwestern saying this, but it’s weird.

Uh, so also it has snowed a lot. When we were flying back from Alaska a week ago, I mentioned to the Alaska Airlines personnel who were checking us in at the airport that it had just snowed another four inches back home. They said, “Wow, four inches,” and exchanged a look reserved for people who live in a place where they average 75″ of snow per year–about twice what Madison gets (43″). But what I meant was–four inches on top of already “so much snow that our smaller dog can’t make her way around the yard and has resorted to following in the big dog’s wake. And also four inches when my in-laws were watching the kid, and lovely people though they are, we don’t have a snowblower and they’re not prepared to shovel the driveway… (spoiler: it was fine). Right now, looking out the window, there’s about a foot of snow on top of the bird bath to my left, and we’re forecast to get more later this week! Our driveway has turned into basically a trench. We could probably survive an attack from the Hun by sheltering there. We will see the lights along the edges when it all melts. And the snow we couldn’t manage to get up on the top of the piles is forming peninsulae that are making it harder and harder to get either car out, but especially mine because it doesn’t have a backing cam.

Also my garage door froze shut twice (at least; it might be frozen shut now) and my car battery died. I wasn’t going to finish/post this comic because we had a day last week (Friday?) when it was 36 degrees out and I thought that maybe it would all melt, but instead only a little of it did, and then it re-froze, and then Saturday we had freezing rain all day. So in summary, I’m done with this shit. So. Done. So this is maybe catharsis, a little.

Wishing you all an early spring.

File this under BT135 L86 2019 for Doctrinal theology–God–Divine attributes–Individual attributes–Providence. Divine intervention.
—
* I sleep like…6.5 to 7 hours per night. Having had a child has 100% fucked up my sleeping. It’s not that he’s waking up; it’s that my sleeping is just not great. I don’t know.