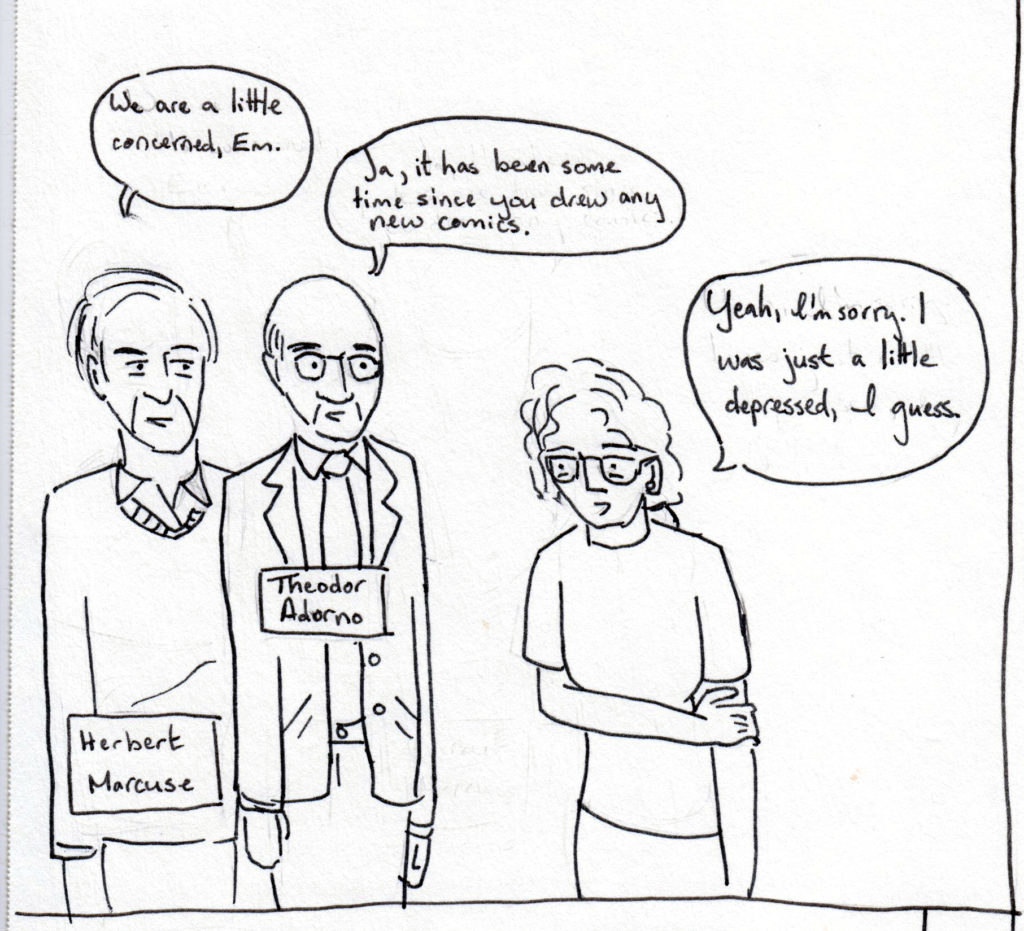 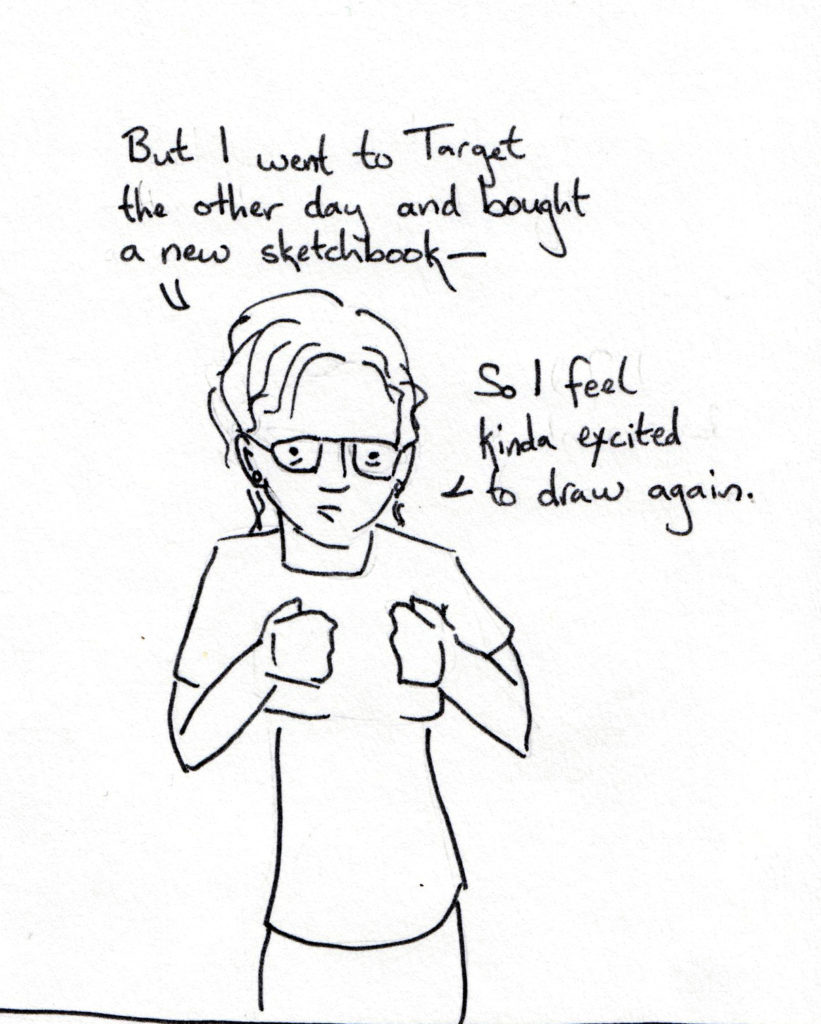 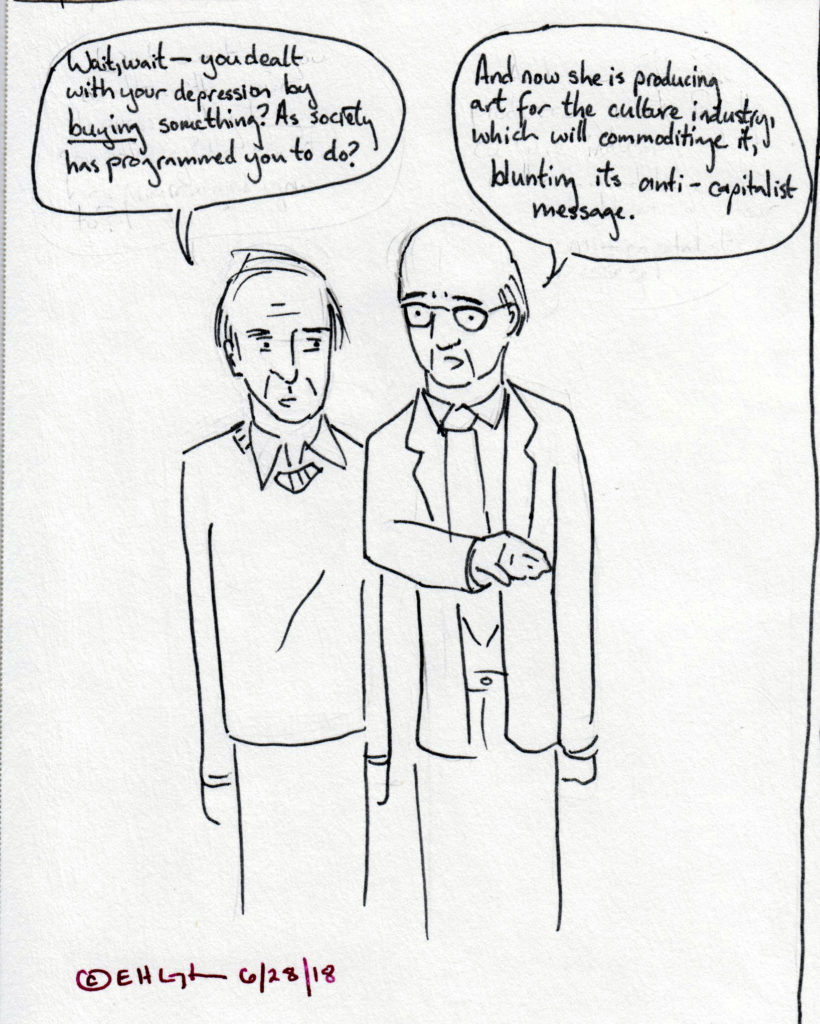 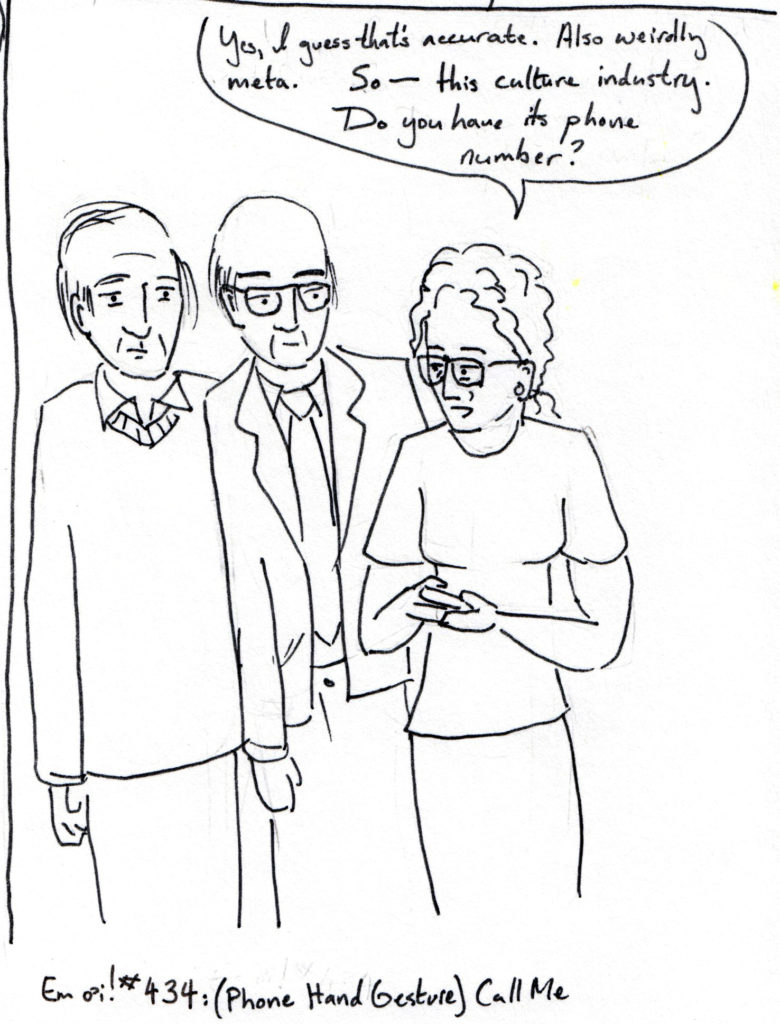 Not too long ago, my brother Daniel recommended a podcast to me called Philosophize This! After briefly trying to argue with him that, basically, no podcaster guy could possibly be as good as my current research system of 1/ watching videos on YouTube, 2/ reading the Stanford Encyclopedia of Philosophy (and also Wikipedia), and 3/ reading one page of Foucault’s History of Human Sexuality per night, I gave up and became a fan. And that was how I met the Frankfurt School. And now I am reading The Dialectic of Enlightenment at a rate of one page per night. So, you know.

Okay, back up. Who were the Frankfurt School? They were a group of neo-Marxist thinkers from Frankfurt, Germany (natch) who started wondering in the mid-1920s why there hadn’t been a really good Marxist revolution and how they could potentially maybe fix up Marx’s theory to deal with that fact. In part because a bunch of them were Jewish, they moved their operations to New York during WWII, and discovered that we are terrible wrote a lot of rather damning things about American monopoly capitalism and the culture industry. They have been in the news a bit because there’s a booming industry in this country right now of people who explain to white men how they are really the ones being oppressed, and part of that narrative is about how Marxism/socialism are oppressive and bad and capitalism is awesome and don’t you miss those glory days when you, a white dude, could work really hard and be rewarded with money and chicks[1]. And if that kind of person hates the Frankfurt School, you know they have to be pretty good. Up until now, the member of their group I was most familiar with was Walter Benjamin. Here, I am looking at two other members–Theodor Adorno and Herbert Marcuse.[2]

I wanna talk about the culture industry for a moment.

Basically, capitalism tends to commodify whatever it touches, and in this case the thing it has commodified is (drum roll) ART. Which art? Whatever you have on hand–film and TV, so-called fine art (paintings or what have you), magazines, music, books, whatever. Essentially, with the advent of capitalism, the commercialization of art becomes really obvious, and art is suddenly being created to net its creators money. Thus the art that is created is art that is marketable, which means that it in some way reinforces cultural narratives (and thereby pacify the populace, preventing the formation of class consciousness and ultimately REVOLUTION). For example, shows like COPS, Rescue 911, NCIS and its ilk, and so on are all created to depict police officers as heroes.[3] I don’t believe that there has ever been an episode of COPS where one of the eponymous cops shot an unarmed 11-year-old boy. Could you imagine the public outcry if a story like that were produced? Instead, better to say that the officer involved in the shooting was either one bad egg amongst a lot of hard workers, or that it was an honest and reasonable mistake, which are somehow things people actually believe and say out loud without thinking that they are in some way bad people for thinking/saying those things when a kid gets shot.[4]

Another way this can work is by taking something that is revolutionary (the podcast used the example of NWA’s “Fuck the Police”) and amplifying it in popularity to the point where all meaning is drowned out by the commercialism (see also my forthcoming “Frankfurt School Powerlifting Team / Reps for Marx” t-shirts). Finally, of course, advertising has become integrated into media products, and it exists to essentially tell you that you have a problem and their product is the solution.[5]

And yeah, I think these are legitimate critiques of the idea. Per #1, I have only taken one art history course, but it’s pretty clear that most (all?) capital-A ART (the type you see in a museum like the Met–anything from like the Renaissance on) was created for what we would call capitalistic purposes–much of it was commissioned portraits of family members for wealthy merchants, or religious scenes commissioned for private contemplation. And artists painted these not because they had a particular yen to do one more gold-leaf painting of Jesus, but because they needed to eat and feed their families and buy paints and canvas. And yes, I know there’s some overlap between the late Renaissance and the beginning of capitalism. But also we could say that before the Renaissance, a lot of art was created at the behest of the church, which also was a way for artists to earn a living.

To point two, I don’t know (yet; I’m still reading) how Adorno would answer this. Foucault would suggest that this is a power system–it’s simultaneously no one pulling the strings and everyone doing it, because that’s how capitalism works on people.

When I first heard the episode that talked about the Frankfurt School, I was struck by this critique of modern life–and also I felt quite guilty, because even though I am generally someone who doesn’t shop a lot, doesn’t buy things for pleasure or whatever, I had been feeling depressed and I had tried to snap myself out of it by buying myself a new pen and a truly startling number of ink samples. And I was still feeling depressed and still kind of telling myself I just needed to think of a good present for myself.

Anyway, if this sounds a lot like some of the other theorists I’ve talked about–Chomsky’s media theory, many of the ways Zizek critiques modern capitalism, even old man Marx himself, well, it seems I have a “type” when it comes to philosophers. And also these philosophers, when taken in a more chronological order rather than piecemeal, start to seem as though they’re building on and responding to each others’ work. I quite enjoyed my little trip through 20th/21st century philosophy (I started with Schopenhauer and worked my way through to Derrrida, and now I’m messing around with Hegel).

I have now spent more time working on this than I have on the latest novella for almost three days. I guess I know too many Marxists who are likely to correct me about the stuff I’ve got wrong here (it’s actually more complex and nuanced theory, so go and explore it). I’m calling this one done at any rate. Let’s file it under HM467 L86 2018, for Sociology–History of sociology. History of sociological theory–Schools of sociology. Schools of thought–Special schools–Frankfurt school.

—
Notes:
[1] Ways in which men are arguably oppressed: society frowns on them when they want to do something other than be a wage-earner, like if they want to be a stay-at-home dad. Straight men’s sexuality is arguably pretty rigid–a lot of people still see women as able to experiment, but men aren’t given that permission. Men are looked down on if they express emotions other than happiness/love and anger (only white men can express anger publicly). During divorces, women are typically given primary custody of their children unless they are provably super incompetent (e.g., addicted to substances) or they agree to give their exes more access. Ways in which men are not oppressed: women having jobs; women being able to pick their own romantic partners; jobs being given out without regard for race or gender (and often in ways that encourage those who are non-white/non-male to apply for them); everyone having access to health insurance. What will fix men’s oppression: feminism, which argues that women and men are equal and should be treated as such by society. What won’t fix these issues: saying that “if women were required to sleep with them, men wouldn’t shoot up women/drive trucks into crowds for being forced to be celibate.” (Editor’s note: We’ve removed a lengthy rant about a writer who will not be named here; the content of the rant can pretty much be derived from first principles. Ms. LM is resting comfortably.)

[2] Technically, The Dialectic of Enlightenment is by Adorno and Max Horkheimer. But the way I draw people, they look way too similar to each other, so I decided to use Marcuse. Also, Marcuse was the one writing about the ways in which capitalism is oppressive, so some of the ideas here are his.

[3] In fact, I believe some groups like the FBI and CIA offer incentives to films that want to showcase agents in them in some way, along with consulting on procedure and other nuances. Of course, these films have to depict the agents in a positive light.

[4] Right now, of course, you are thinking to yourself–wait, what about fan fiction? Is that a reappropriation of cultural touchstones by the people now devoid of folkloric heroes, or simply the mealy mouthed re-recitation of the same tropes endemic in the original media? I don’t know! It’s very exciting, isn’t it.

[5] One of the weirdest things that I’ve noticed lately is not just product placement in films, like ET eating Reeses Pieces, but characters from films appearing in commercials for the products that are sponsoring the film. But maybe this is pretty normal at this point and I just never noticed.

[6] Even if the rom-coms don’t reinforce the cultural narratives about marriage etc., they still act as escapism and prevent their viewers from focusing on the true issue–REVOLUTION. Oh, and also that the Enlightenment was bad. So. You know.