A little more surreal than we typically go, with I guess the exception of some of the older strips like this one: 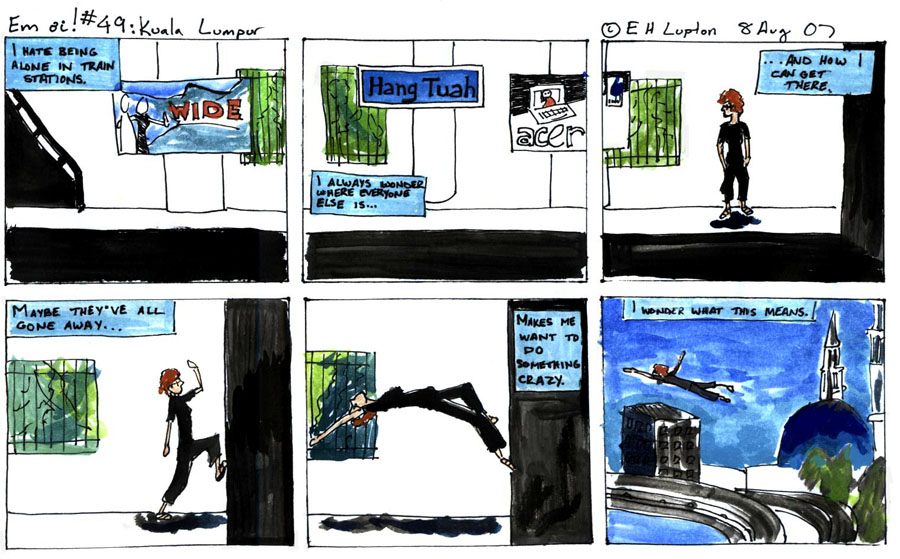 I was going to write something mildly amusing about stress here, but then Daniel introduced me to Numberwang and I sort of figured “why bother?” No, that’s not right… uh…This started when I had to edit about 320 pages in a week (actually closer to 450 over two weeks, since there were two distinct projects). That kind of speed is not my favorite, since I am pretty meticulous in my editing and like to have a chance to look at things really closely, and when you have to edit fifty-ish pages per day, you often can’t do that.

Life has been as usual a series of ups and downs here. I ran my last race of the season, the Burbee Derby, on Thanksgiving. It was my slowest 10K of the year at 52:34 (the fastest was the 50 Furlong World Championships at 50:55; of course, 50 furlongs is actually 6.25 miles, but I measured the Burbee course at 6.3). I feel both happy to not have any more commitments until New Years and a little sad not to be preparing for any major races. Still, I’m committed to sitting on my tuchas and eating ice cream caramel cookie crunch gelato for a while.

Other events: The dishwasher developed (at some point, we’re not sure when) a small leak that eventually ate through the basement ceiling. Lucky for us, it has been far easier to fix than we ever anticipated. And I have more editing projects, though less urgent than the one I handed in last week.

Finally, NaNoWriMo ended and I lost, having written just under 25K words in the month of November. People actually ask with some frequency if I do NaNo, and I hate having to admit that I have won once in the ten years or something I’ve been doing it. Come to think of it, I may have cheated that year and worked on a novel-in-progress. So that would be possibly zero times I have managed to write a novel in a month. And I am an actual legit published author! So congrats to those who won, and for those who didn’t–you can still be writers, it’s okay. (Side note: I see that suddenly GUD is apparently gearing up to publish their Spring 2014 issue sometime…maybe in early 2015 by the look of their last blog entry? Given that their last published issue was actually the one I was in, if they manage to pull off another issue I will be able to feel like I didn’t have a hand in killing them somehow. So, um, good luck, guys?)

(Side side note: Despite having actually been published by GUD and having signed a contract with them and everything, I actually have almost no idea who works there, with whom I corresponded, the behind-the-scenes processes, none of that. I corresponded primarily with someone who I somewhat believed was using a pseudonym, and xe was not especially verbose or interested in offering explanations. Oh well.)

I’m still trying to come up with time to think semi-rationally about what to run next year. I have been mostly thinking of 10K to half marathon-length races, because I would like to see if I can improve my speed and maybe even place at the half marathon distance (the only distance from 5K to 50K that I have never placed in the top five at). Or I could go crazy and do a 100K or something. I have heard there’s a plan for a 100K on 50 miles per week, which is basically what I do now. But I’d guess it wants at least a few runs in the 25 to 30 mile range before the race, and I don’t think I can handle that without injury right now. So maybe shorter races it is. Or maybe it’s time to overcome my fear of open water swimming and my crappy biking and do a real non-pool swim tri, since my oly this summer went quite well. Or maybe a couple of duathlons? There are too many choices. I’m going to go sleep on it.

Let’s file Em oi! #403 under BF575 S75 L86 2014, for Psychology–Affection. Feeling. Emotion–Emotion–Special forms of emotion, etc., A-Z–Stress. Don’t ask me what “special forms of emotion” are; sometimes LC speaks to us in mysterious ways. Em oi! #49 can be filed under G557 L86 2007 (since it never got an LCC number originally, I hadn’t started library school yet when it was drawn!), which stands for Geography (general)–Mysterious disappearances, triangles of death, etc.–General works. That is a much more imaginative tag than I gave LCC credit for; I have underestimated them and for that I am sorry.