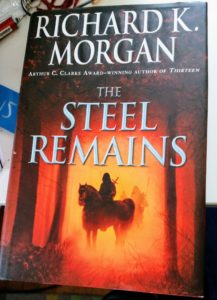 Okay, quick summary: Ringil Eskiath (known as Gil) is a paunchy, 30-something guy who used to be a great war hero and is now sulking in the sticks, telling his story in exchange for free drinks at the local pub. One day, his mother shows up and asks his help in retrieving a cousin who was sold into slavery. For various reasons, Gil agrees to do this thing. The cousin is something of a MacGuffin though—as soon as Gil arrives in his hometown of Trelayne, he starts hearing rumors that there’s a mysterious, almost mythological creature known as a dwenda lurking in Etterkal (the once-bad part of town where the slavers now legally make their living). One evening, he goes down there to kick in some heads, and winds up losing to the dwenda (known as Seethlaw) in the process, but something about Gil intrigues Seethlaw, who doesn’t kill him but instead takes him as a lover. Eventually, they journey to Ennishmann, where the cousin has been shipped to serve as a dwenda sacrifice prior to a planned invasion.

In the meantime, we also follow the stories of two of Gil’s former comrades-in-arms, Archeth, who works for the Throne Imperial, and Egan, a member of a nomadic tribe called the Majak. While Archeth investiates an apparent dwenda attack on a garrisoned port city, Egan deals with mutinous forces among his people. Eventually, all three of them wind up in Ennishmann, and there’s a big battle with the dwenda, who at least appear to call off their invasion for the time being and leave.
Okay, so I have a lot of feelings about this book. First, the good:

And my other feelings; I hesitate to call them “negative,” more like just things that are lingering questions:

I’m planning to read the two sequels, so don’t take any of the above points as reasons to not read this. They’re just some things that stuck out in my mind when I was finished.

I started reading the book because I was told that the use of language was much different from other fantasy novels, and it was. The presence of an interesting female character was also exciting. This started as my read-on-the-dreadmill book, but quickly became a read-all-the-time book. Highly enjoyable and recommended.