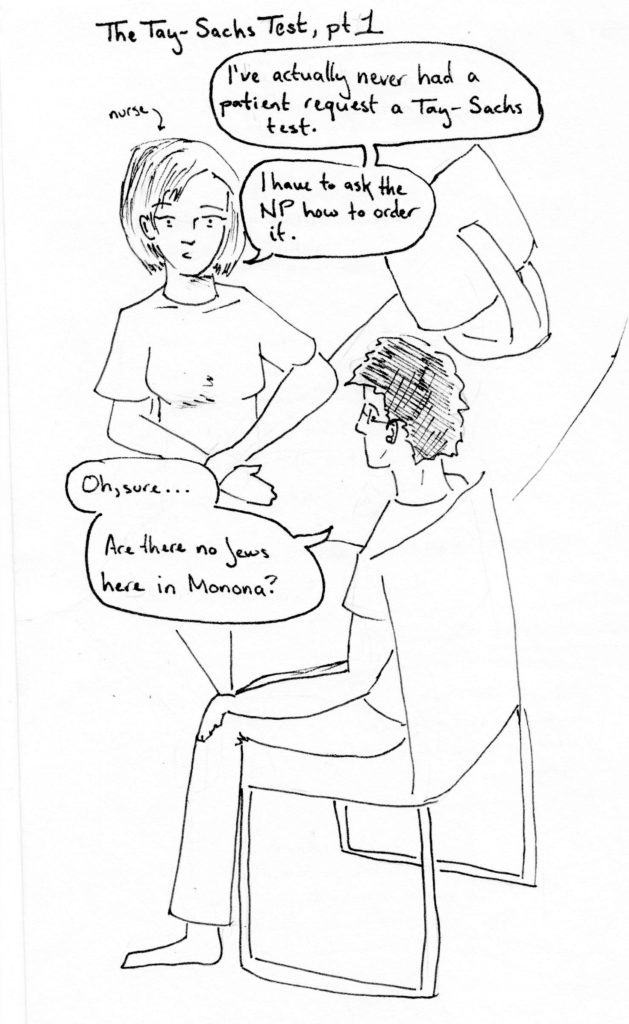 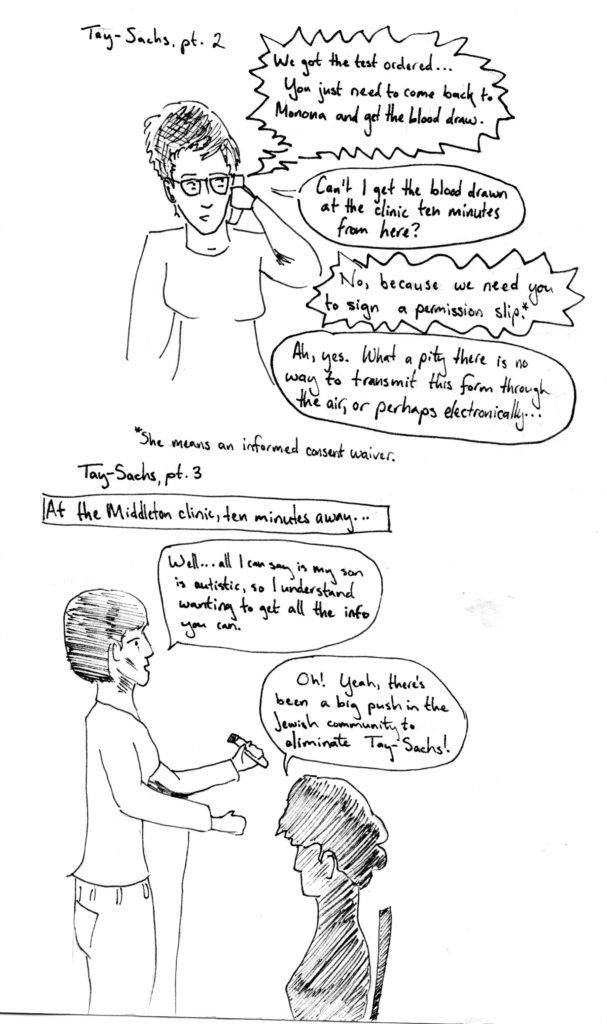 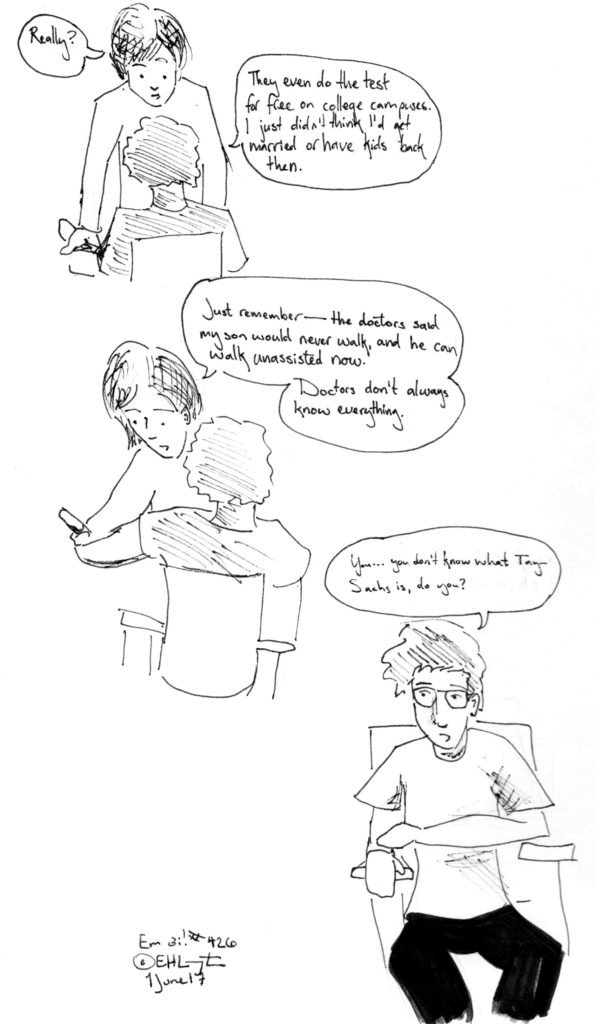 Necessary background to this: OB functions at my medical practice happen in Monona, about 25 minutes from here. There’s also a clinic with a lab in Middleton, which is maybe 5-10 minutes away.

So. This feels a bit like whistling in the dark, to be honest.

Tay-Sachs is a degenerative nerve disease, invariably terminal, that is inherited in a recessive pattern on chromosome 15. It’s much more common in a couple of ethnic groups–it was first spotted amongst the Ashkenazic Jews (i.e., Jews with an Eastern European heritage), but I believe it’s also somewhat common among French Canadians and Cajuns. Originally, there was a hypothesis–I think it was called the Jewish Fur Trader Hypothesis–that had all these groups being connected somehow, but in fact it turns out there are different genes that are more prevalent in each group, all of which produce the same symptoms.[1]

Anyway, a test for Tay-Sachs was first developed in 1971 (one of the first such tests available), and since then because of the push for genetic testing, rates have dropped precipitously, even among the ultra-orthodox.[2] There are actually places in the country you can get tested for free (like Albert Einstein Medical Center in Philly), and they used to run drives to get people screened at the Hillel Foundation on campus, if I’m recalling correctly. So it was always kind of in my mind that I would have to get tested if I married someone of Ashkenazic heritage, and I assumed that most people who could be affected would know that. But perhaps not. I was later told, after the encounters chronicled here, that most people don’t walk in to their first appointment and request to be tested for certain conditions–even though the nurse actually asked me specifically if there was anything I wanted to be tested for. This encounter also led me to determine a law, which I formulate as “The more time you spend around medical personnel, the more likely you are to realize that they have as high a rate of idiots as any other profession.” That same nurse pictured in the first panel also advised me not to lift more than 25 lbs. I didn’t ask her what pregnant people who already have a toddler do (other questions not asked: For what lift? Do you mean with one arm, like a dumbbell curl, or like don’t deadlift over 25 lbs? Do you realize how weird and Victorian that sounds?).

[1] Which, by the way, is kind of interesting in itself–that there isn’t a one to one correspondence between genetic issues and diseases, because in most (all?) cases, the disease was observed first, based on the symptoms, and then a genetic test was developed for it later. We’re only just beginning to use this knowledge to our advantage in treating some conditions, like cancer. Somewhat relevant PhD Comics comic. This is also why the whistling in the dark comment–when you get your results back, they say something like, “We can say with 92% certainty that you’re not a carrier,” because there’s a tick box on the form where you note your background and they look for those genes, so in theory you could still be carrying a gene they didn’t test for.

[2] The ultra-orthodox tend to be anti-selective abortion, which is weird for various reasons of Jewish doctrine that I won’t get into, as it relies on my somewhat untutored understanding of Talmudic doctrine. Also I should note that rates of out-marriage increased significantly in the twentieth century (probably not among the ultra-orthodox), which would lead to lower rates of Tay-Sachs as well.