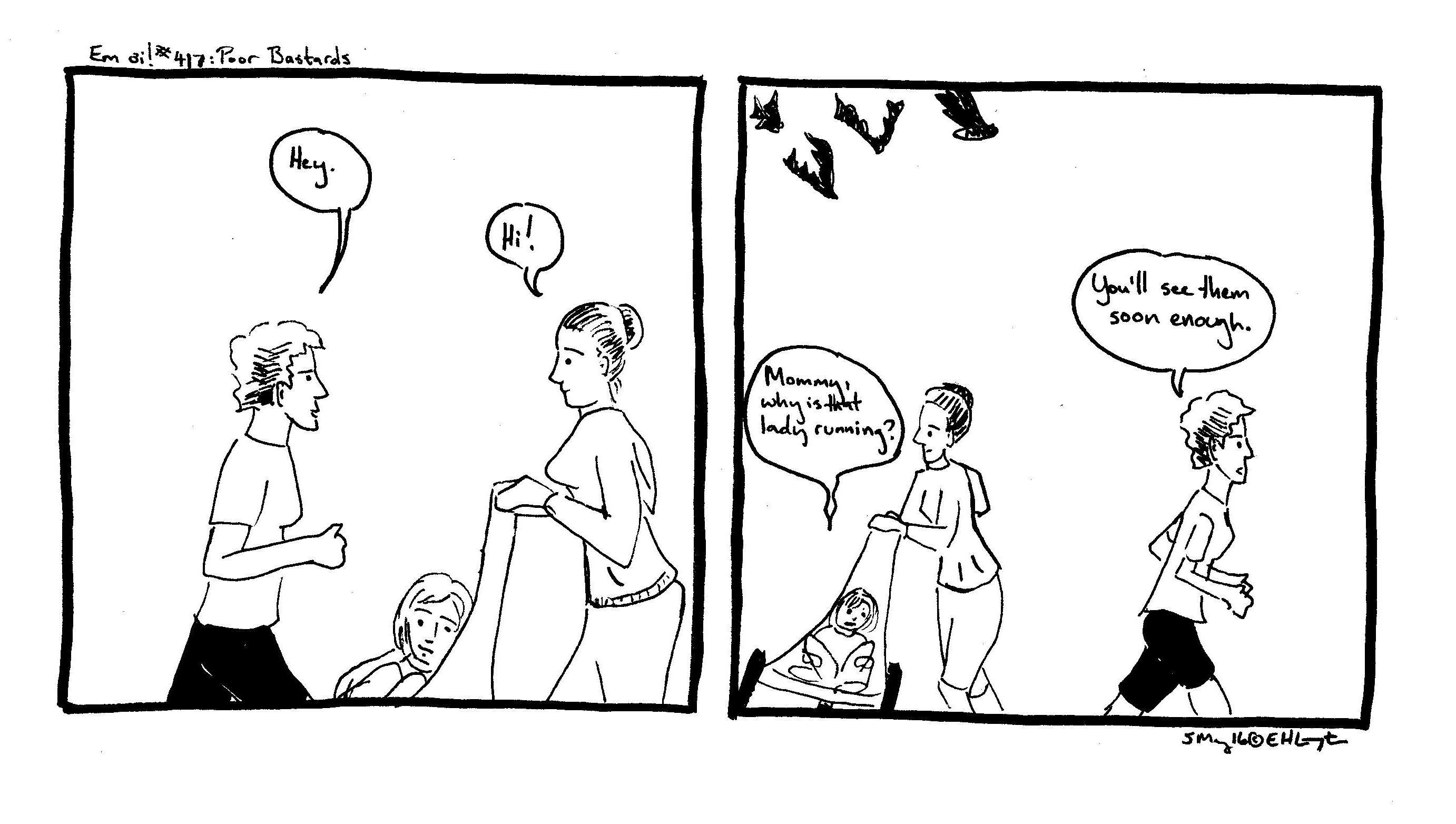 Ooh name that book. Or film. The film was also excellent.

Anyway, TWO COMICS IN ONE WEEK? I should pace myself better. Oh well. This actually happened–I didn’t hear the woman’s explanation to her offspring. I do wonder what she said. Okay, let’s bad segue into a quick discussion of the 2016 LMR 20k! (Link to last year’s race report.)

I was faster than last year, which was my goal. I didn’t beat anyone else in my running group, which was my other goal. This coming week, Saturday May 14th, I have a trail half marathon (the Ice Age half marathon) in La Grange, WI. I was hoping to use the LMR20K to predict my pace for the next race. If the two courses were similar, I would expect a 1:55:xx based on this performance. But they’re not–the trail race is a seriously harder course. And the weather may be quite a bit warmer. So we’ll see.

It was nice to race, though. I put off signing up for many races this spring because of stuff going on in my personal life and I have been missing it. In addition to the upcoming half, I’m also in for the Blue Mounds 18k and the half at Dances with Dirt. Depending on how things go health-wise, I would also like to do something crazy in the fall–maybe an ultra of some sort. Earlier in the spring, I was having some ankle pain after running distances farther than about 16 miles, so I’m going to wait and see if that has cleared up. Surprisingly, swimming helps keep my ankle tendons flexible when these things flare up.

I’ve run the Lake Monona 20K (LMR) almost every year since 2009. Along the way I’ve watched it change from a fairly small race to a large one, with all the attendant problems that change could be expected to produce.

For fun, here are my results:

Holy cow, I was fast in 2010! I ran my half marathon PR that year too, apparently—1:46:02 at the Madison Mini-Marathon. (I have just discovered that there’s a website, Athlinks, which I am probably the last person to find and which displays all my race results ever going back to my first-ever 5K in 2005 in which I finished in 38:05. Holy shit.) So this year was either my third fastest or third slowest, depending on how you look at it.

The course is a nice one; it begins at the Monona Public Library, runs through some hills in the first 5K, has about 10K through downtown Madison/the Near East Side that’s quite flat, and then a few more hills as you come back into Monona. Most of my running group is getting ready to run a 4-hr (ish) marathon at Green Bay in two weeks, so the training pace was set for 8:59 min/mi. Well, good luck. The race now has 1,225 runners, which makes the start quite congested. After shuffling forward for (what felt like) a couple of minutes after the gun (in reality maybe 90 seconds), we crossed the timing mat and took off at an easy jog. At one point, hitting about 9:30, I joked to my friends, “This is the training pace, right?”

There was a lot of weaving and throwing of elbows through the first two miles. Eventually we managed to find enough open space to really get up to race pace, and to make up time we wound up running a little faster than 8:59 (miles 4–7 were 8:4x, so were 9 and 10). Ironically, the people I was running most with are not doing Green Bay, and neither am I. What the heck. We came through the 10K in about 55:08, which is fine, and hit the 15K in 1:22:25. Then a combination of heat, lack of water, and fatigue started dragging me back, and I slowed to a 9:xx pace. But at that point,we were almost to the finish, so it almost didn’t matter. With about two miles left, we met a guy named Jud from SLC who was having a pretty hard time of it. He was fun to chat with for a little while before he slowed down to walk, and my friend and I kicked it in to the finish.

At this point, I made a critical mistake, which was chugging three quarters of the bottle of water I got handed and then eating a granola bar and half an apple. The sudden entry of food and lots of water into my stomach when I had been moving so hard in the heat undid me. I had to sit down for a few minutes because I felt woozy, and then I slowly shlepped the half mile back to my car to drive home, grimacing from some unpleasant stomach cramps. When I got home, I had a shower and a nap, and then I took a salt tablet with my lunch, which made a pretty big difference in how I was feeling. So, pro tip: if you run really hard, don’t eat directly after you stop running. Give it a moment. Add fluids gradually. You will feel much better. Also, if you’re on a course with infrequent water stops and it’s the warmest day of the year so far, bring both salt tabs and your hydration system. I neglected to bring both, and regretted it.