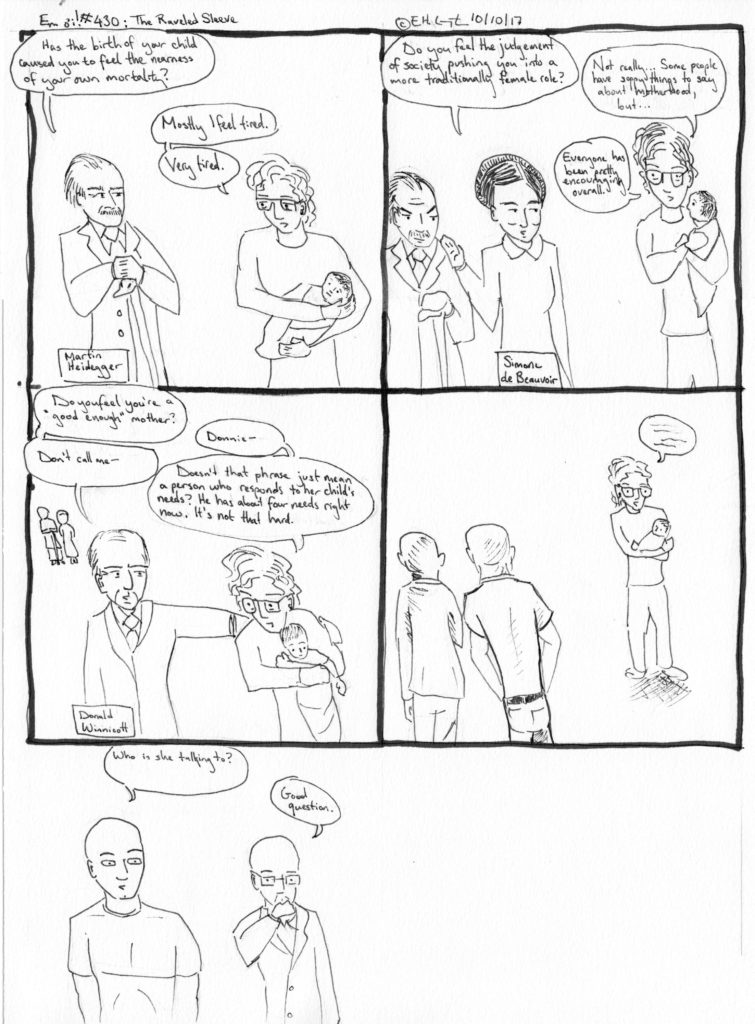 The kid started daycare this morning. So there’s that. The upshot is that I have a few minutes to think about comics. Apparently I finished inking this one on October 10th, which means it took me nearly a month to erase the pencil lines and scan it. Oops.

If you are going to ask me, “Hey Em, why have you been so obsessed with Heidegger lately?” The answer is I’m not sure. I watched a couple of entertaining videos about him last month (example 1; example 2). (I spent a lot of the last twelve weeks sitting on the sofa with a fussy/hungry/just cuddly baby, watching videos about philosophers.) Heidegger’s ideas about learning to live authentically through being aware of our temporary, fleeting lives are interesting in the same way that Buddhism’s ideas about samsara are interesting. And in fact a long time ago I edited a book of essays about Asian philosophy that discussed the similarities between Heidegger and Zen Buddhism. But at the same time, as I’ve been spending time watching our dogs and the kidlet, I’ve become somewhat convinced that the way to live authentically isn’t to live with an awareness of one’s own mortality, as Heidegger would have it, but more to live in the present. Of course, the rejection of “noise” (das Gerede) is probably a good idea to help us learn about the value and connectedness of life (das Sein).

There’s also the problem that Heidegger was kind of a Nazi. A lot of sites that talk about his philosophy gloss over this or sort of apologize for it, but he never really did so. I should note that I have mixed feelings about that article’s seeming removal of culpability from Arendt by saying she was “in thrall” to him. Dude wasn’t a vampire; she made a choice to defend him. But that also raises the question of why, which is not satisfactorily answered.

Simone de Beauvoir’s remarks are influenced mostly by my understanding of her quote about “One is not born, but rather becomes, a woman.” Her meaning is about socialization, I believe–being a woman is essentially a social construction. Times of upset in one’s life that require a reorganization, like marriage and births, are times when one can feel one’s socially assigned role shifting significantly, sometimes whether one wants it to or not. There are certainly a lot of people who have told me sort of soppy, annoying things about motherhood (e.g. don’t come up and tell me I’m the most important person in my son’s life, I am not his only parent and I don’t want that kind of pressure), but the “mom shaming” one hears so much about has not really been a problem.

I have been approached by a lot of old people who want to look at the baby though. What’s up with old people?

For more on Donald Winnicott’s ideas about motherhood (or parenthood, if he were writing today), you can see the book Are You My Mother? by Alison Bechdel. She goes into it much better than I could. Or Wikipedia has a summary here. Basically, “meet the child’s needs, and it’s okay to fail a little bit.”

All right, I am going to spend the last twenty minutes of my lunch break with my head down, since I slept 4.75 hours last night. Whee.

We’ll file this under RC547 L86 2017, for Internal medicine–Neurosciences. Biological psychiatry. Neuropsychiatry–Psychiatry–Neuroses–Sleep disorders–General works. Because there doesn’t seem to be a call number for “sleep deprivation torture caused by having a newborn around.” Also, why is psychiatry cataloged under “internal medicine”? If internal medicine just means “stuff inside the body,” it arguably contains (as a category) all branches of medicine except maybe parts of dermatology. Weird.

Our other children having a meeting.